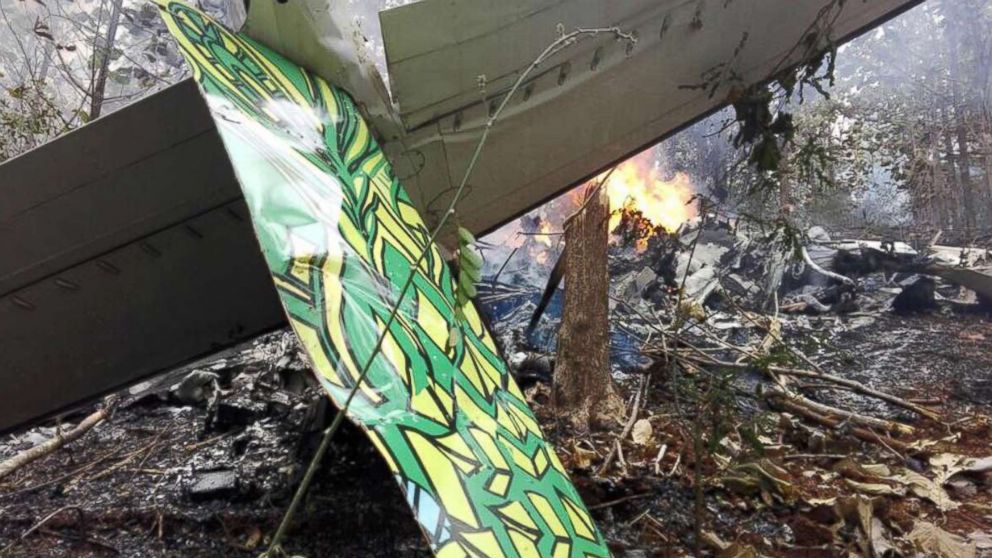 Two American families were among the dead, ABC News has confirmed.

The plane crashed in Guanacaste just moments after takeoff from Punta Islita Airport, according to officials and witnesses. The wreckage of the plane, a private aircraft belonging to the airline Nature Air, was on fire and no one responded when it was found by rescue crews, according to Costa Rica's Ministry of Public Security.

"The government of Costa Rica deeply regrets the death of 10 American passengers and [two] Costa Rican pilots in an air crash of aircraft TI-BEI from the company Nature Air, which occurred midday today near Nandayure, Guanacaste," the office of Costa Rican President Luis Guillermo Solis said in a statement Sunday night.

The U.S. Department of State confirmed that "multiple U.S. citizens" died in the crash.

"We can confirm the death of multiple U.S. citizens in an airplane crash in Costa Rica on December 31, 2017," a State Department spokesperson said. "We express our condolences to all those affected by this tragedy. We are in contact with Costa Rican aviation authorities and will continue to monitor the situation."

The State Department declined to identify the people on board "out of respect for their families."

A family of four from Tampa Bay, Florida, was among those killed, the rabbi at the family's synagogue said.

Mitchell Weiss, his wife, Leslie Weiss, and their two children, Hannah and Ari Weiss, all died in the crash, according to Rabbi Jacob Luski of Congregation B'nai Israel of St. Petersburg, Florida. The parents were both physicians, he said.

"It's a terrible tragedy. It's a devastating loss," Luski told ABC News. "They'll be surely missed, and we still are trying to deal with understanding such a loss."

A family of five from New York were also killed, the rabbi at that family's synagogue said.

Bruce and Irene Steinberg as well as their three children, Zachary, William and Matthew Steinberg, all died in the crash, according to Rabbi Jonathan Blake of the Westchester Reform Temple in Scarsdale, New York.

"This tragedy hits our community very hard," Blake wrote in an email to the congregation Sunday night.

Zachary Steinberg graduated high school in 2016 and his brother William graduated the year after. Matthew Steinberg was a student at Ethical Culture Fieldston School in New York City, according to Scarsdale Public Schools superintendent Thomas Hagerman.

"This tragedy is hard to process for a variety of reasons, not least among them the loss of an entire family in one instant," Hagerman said in an email to the school district community on Monday. "The Steinbergs' recent graduation dates and rich involvement in the district created a variety of connections which intensify the grief we feel."

Backroads, a travel company headquartered in California, confirmed in a statement Monday that the passengers aboard the downed plane were on a trip it had organized. There were nine Backroads guests, a Backroads trip leader and two flight crew members on the Nature Air flight, the company said.

"Officials in Costa Rica have confirmed that there are no survivors," Backroads said in the statement. "We are extremely heartbroken over this horrific loss of life and are working with the local authorities to understand the cause of the crash. We have our entire Costa Rica team on the ground to assist in this tragedy, in addition to a member of our executive team, who is [en] route to Costa Rica."

"Unfortunately, Backroads lost one employee in the Costa Rica plane crash yesterday and it was Amanda Geissler. The family has requested that the media does not mention where she is from," Einbinder said in a statement Monday.

Dawn and Matthew Wolfe, who have been vacationing in Costa Rica for a month, said they and their three children were sitting in a restaurant near Punta Islita Airport when the plane took off. They said within minutes of takeoff the plane took a nose dive and crashed.

"When I saw it sideways, I thought, 'Oh, is this a plane doing a trick?' I thought, and then I went, 'Wait, that's a big plane to do a trick,' and then it ... I mean, it ... we just ... our heart sank, we got some pain in our stomachs," Dawn Wolfe told ABC News. "I looked at my husband and said, 'You need to go,' and right at that time two other gentlemen were running up the road, so my husband just ran with them, and they just started right toward the wreckage."

Costa Rica Civil Aviation director Enio Cubillo said at a news conference Sunday that the Nature Air pilot, Juan Manuel Retana, was very experienced. Cubillo said the cause of the crash was under investigation.

The Federal Aviation Administration (FAA) found Costa Rica to be Category 1, which means the country meets safety standards established by the International Civil Aviation Organization (ICAO) for safety oversight of civil aviation. Carriers from Category 1 countries are permitted to operate into the U.S, according to the FAA.

The ICAO graphs countries' safety performance and compares it to other countries via an online tool available to all airline passengers. The most recent ranking shows Costa Rica close to the U.S. in most categories and even ahead of the U.S. on legislation, accident investigation and navigation services.