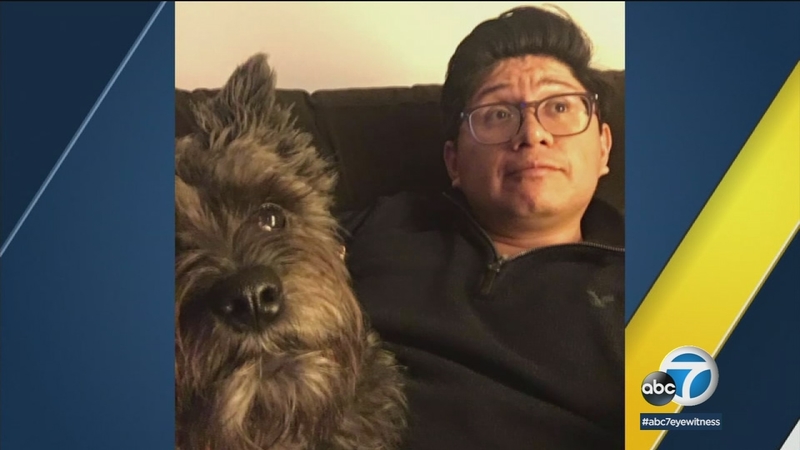 MIRACLE MILE, LOS ANGELES (KABC) -- The family of a man left clinging to life after a hit-and-run in the Miracle Mile pleaded for help to find the driver and bring that person to justice.

Emilio Heredia appeared to be laughing as he donned huge white sunglasses in a photo with friend Jose Acosta. Acosta relayed what little he knew about a hit-and-run that left his friend in bad shape at Burnside Avenue and Wilshire Boulevard in the early morning hours on Dec. 31.

"The police officer that found him, basically, there was no call made. He was just doing his rounds, is my understanding, and just found him there," Acosta said.

Friends and family cannot believe the driver left the 34-year-old broken, battered and bleeding in the street.

"It's been hard for his family. He has no family here, so they've all been finding out days - at least I found out two days or three days after the incident happened because he lives here by himself," Acosta said.

The same can be said for Emilio's mother, who lives in New York. By the time she could find a ticket and overcome weather obstacles, she arrived days later to find her son in a coma at Cedars-Sinai.

"Before the police came, and before somebody can help him, he was bleeding on the floor and he did this to my son and he was alone," Emilia Heredia said, holding back tears.

Emilio had just moved to Los Angeles less than six months ago. He settled in with a new job, but his insurance did not kick in until Jan. 1, so his family is struggling to figure out how to pay for his ICU bills from New Year's Eve.

A GoFundMe page was set up with the intent to raise $10,000 to offset some of those costs.

"We're definitely heartbroken that this happened. We really just want to make sure that someone who can hit an individual and walk away from it knowing their life is on the line should come to justice," Acosta said.

Emilio is not out of the woods yet. He broke his leg, broke six of his ribs, one of which punctured his lung, lost his spleen, has a partial pancreas and liver, and suffers from internal bleeding.

His mother vows to stay by her son's side until he is OK.

Los Angeles police said there were witnesses who heard the accident, but no one has come forward saying they actually saw the crash. Anyone with more information is urged to contact the police.