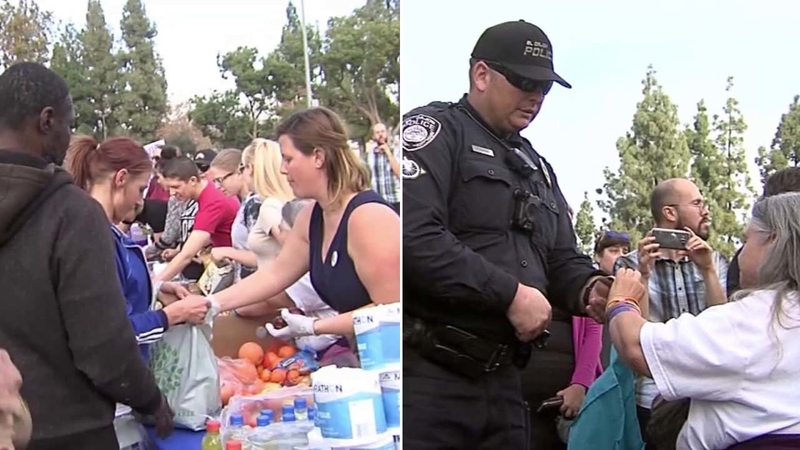 Activists arrested in SD County for feeding homeless in park

EL CAJON, Calif. (KABC) -- More than a dozen members of a homeless rights advocacy group were arrested in San Diego County for feeding the homeless on city property in defiance of a city ordinance.

Members of the group, Break the Ban, were arrested at Wells Park, organizers said.

More than a dozen people were arrested Sunday and cited after violating a new city ordinance in El Cajon, which makes it illegal to feed the homeless in a public park.

The group's intentional act of civil disobedience was in honor of Martin Luther King Jr. Day.

The city said the ordinance is necessary to prevent the further spread of hepatitis A.

However, the group said it's unfair because the city allows people to share food with people at a birthday party but not with the homeless.

None of those arrested were taken away in handcuffs, but everyone seen by police handing out food was arrested, given a misdemeanor citation with a date to appear in court and released, according to the Union-Tribune. Included in that group was a 14-year-old.

Several dozen other people supporting the group but not seen actively passing out food were not arrested or cited.

Break the Ban organizers defended the group's action by quoting, in part, from a letter Martin Luther King Jr. wrote from jail which reads, "There are two types of laws: just and unjust. I would be the first to advocate obeying just laws. One has not only a legal but a moral responsibility to obey 0just laws. Conversely, one has a moral responsibility to disobey unjust laws. I would agree with St. Augustine that an unjust law is no law at all."'