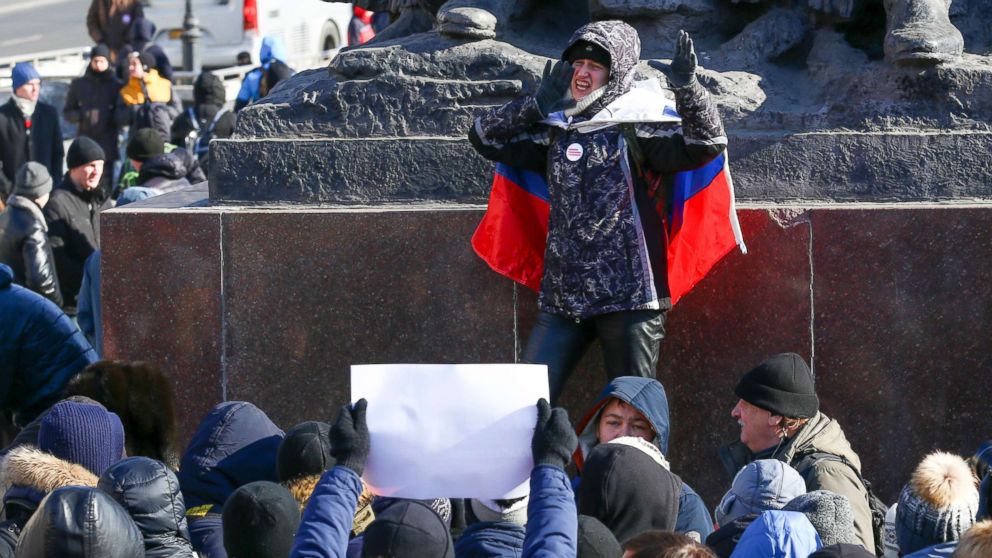 ABCNews
By PATRICK REEVELL
Russian police detained a top opponent of President Vladimir Putin today as thousands of people around the country protested against a lack of competition in presidential elections planned for this spring.

Alexey Navalny, an anti-corruption campaigner who has become Russia's most prominent critic of Putin, was seized and dragged violently into a van by police as he tried to join one of the protests that he had called for in central Moscow.

"I was detained," Navalny tweeted in Russian from inside the police van. "It does not matter ... You don't go for me, but for yourself and your future."

Navalny also tweeted a video of his arrest and photos from the protests.

Late on Sunday, Navalny tweeted he had been released by police without any charges being filed, but his lawyer, Olga Mikhailova, told Reuters that he would have to face court at a later date. Almost 300 people were reported to have also been detained during the protests, that nonetheless passed off with fewer arrests than at previous rallies.

The protests, which had been expected in 100 Russian cities, were called by Navalny after he was blocked from the election that is scheduled for March and in which Putin faces no substantial opposition.

In response, Navalny has called for a boycott of the vote. Today's protests were meant to back the proposed boycott while also tapping into discontent around official corruption and economic malaise. The protests were the first major demonstrations since Russia's election campaigning began.

People joined demonstrations from Murmansk in the far north of Russia to the port of Vladivostok, which is seven time zones away. Protests ranged in size from dozens to several hundred people.

In many locations, the protesters were braving blisteringly cold temperatures; one of the coldest sites was in the far eastern city of Yakutsk, where it was 49 degrees below zero.

In Moscow, a few thousand people streamed along the city's central avenue, gathering at Pushkin Square around half a mile from the Kremlin. Several hundred stood there chanting, "Putin is a thief" and "Russia without Putin." Some carried joke signs mocking Putin. One man who was dressed in a Putin mask and wearing a crown walked around the crowd with a bucket asking for "taxes" and telling people he would "take everything."

At least 290 people were detained during the protests, according to OVD-Info, a group that monitors arrests.

There was a markedly heavy police presence in Moscow ahead of the protest, with dozens of riot vans and empty buses parked waiting in case of arrests. Camouflage tents and an army-style field kitchen had been set up near the square.

Hours before the Moscow protest began, police raided the offices of Navalny's organization, the Fund for Combating Corruption (FBK). Police claimed there was a bomb threat at the building, a common tactic used against opposition groups here.

Officers broke in the door to the office as Navalny's staff conducted a live-broadcast on his popular YouTube channel covering the protests. When officers arrived, the staff struggled to read their bulletin over the sound of sawing metal as police cut through the door into their studio. Police had also searched Navalny's campaign offices in a number of cities ahead of the protests.

Compared with previous protests, however, the mass security forces were barely needed. Major protests in March and June saw large-scale arrests, with over 1,000 people detained in Moscow alone in June. This time, fewer than two dozen were detained in Moscow as police largely left protesters untouched. Police ordered demonstrators to disperse but did not move to seize them as at previous rallies.

Eventually part of the Moscow crowd, a few hundred people, began marching in a column toward the Kremlin, chanting "Down with the tsar". Police permitted the protesters to get within around 1,000 feet, or 300 meters, of the Kremlin, before most of the column turned back of its own accord and headed into another part of the city, accompanied by police.

The softer approach suggested authorities have adapted their tactics to Navalny, avoiding the mass arrests that had made global headlines last year and instead focusing on detaining the protests' organizers. Demonstrations called by Navalny on Putin's birthday in October also saw few arrests.

Today's protests were seen as an important test for Navalny's significance during the election, now that he has been barred.

Over the past year, Navalny has built a large grassroots organization around the country that claims to have 200,000 volunteers. His investigations into alleged corruption by top officials and members of Putin's inner circle, often presented in irreverent videos, have garnered him a big online following. A series of protests that he led last year was the biggest Russia had seen in half a decade.

Navalny had demanded that he be allowed to run in the election against Putin. But in December, Russia's election commission refused to register his candidacy over a fraud conviction that he says is trumped up, a charge backed by the European Court of Human Rights that found his conviction was "arbitrary".

Navalny has said he was blocked because the Kremlin is afraid of allowing him to compete.

In December, Putin dismissed Navalny as irrelevant but suggested that he would sew chaos if he was permitted to run.

The boycott called by Navalny is intended to weaken turnout at the election enough to discredit in what is seen as Putin's inevitable victory. A number of other candidates are running, including some who have repeatedly lost to Putin and whom critics say have only been permitted to run by the Kremlin to create an illusion of competition.

"They are like, fake," Ruslan Borodinov, a 25-year-old butcher at the Moscow protest said of the other candidates. "Like an illusion of choice. There's no one to choose."

Borodinov, who volunteers for Navalny's organization, had traveled several hours from a town outside Moscow.

Others at the rally said they didn't expect it to have much impact but that it was important to show that there are opponents of Putin in Russia.

"By itself, I hardly believe that we are going to achieve anything. But it's the first step," said Anna Kanunikova, a 32-year-old translator who was at the Moscow protest. "If we do nothing we will achieve nothing."
Report a correction or typo
Related topics:
abc newsnational
Copyright © 2020 ABC News Internet Ventures.
More Videos
From CNN Newsource affiliates
TOP STORIES