3 killed, including children, in suspected DUI crash in Vermont Knolls 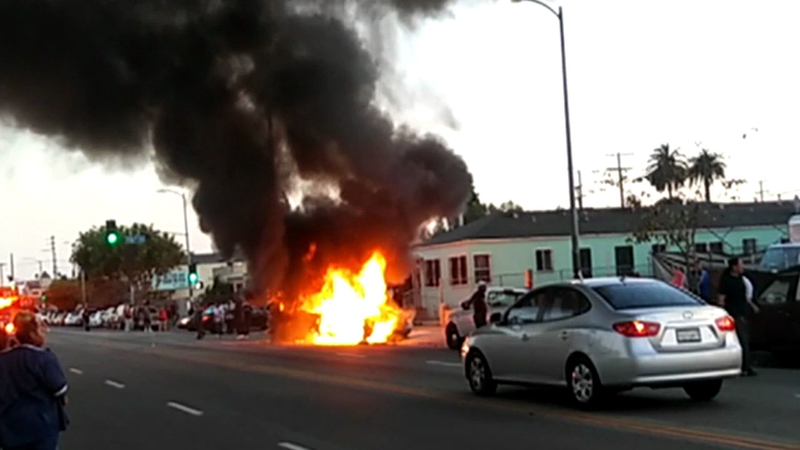 The incident was reported around 7:30 p.m. Saturday at Hoover and West 76th streets. Authorities said five people were in a van and a male driver was in a car.

Witnesses said the suspect in the car who caused the crash appeared to be under the influence. They said they also saw him hit another vehicle and then race away as he drove the vehicle.

Authorities said three people - an adult, child and infant - were killed in the crash, while two adults and a child were hospitalized in critical condition.

Witnesses also captured video of the horrific incident as flames shot up in the air and black smoke billowed around the vehicles.

"I heard a lot of voices and I heard like a baby. I heard people saying, 'Help. Help! Oh my God. Help!'" Rosario Barajas said. "I saw a girl, like a teenage girl. She came out of the van. I think she was already burning, but she was trying to find someone inside the car and she pulled out a little girl or a boy. I didn't saw it real well."

Barajas went on to say that she saw the suspect get out of the burning vehicle and roll on the ground to stop the flames.

Witnesses had rushed to try and help those inside, but the flames were too intense and explosions caused the crowd to move back.

Authorities said the suspect, who was one of the three people taken to a hospital with critical injuries, was taken into custody later Saturday and booked on suspicion of DUI.