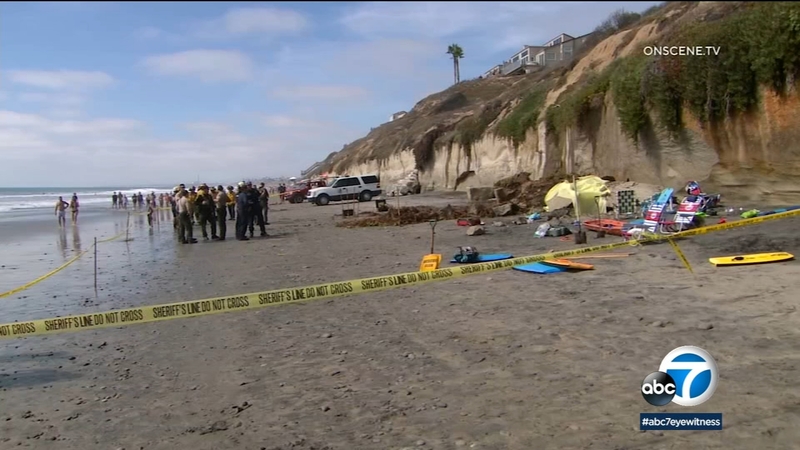 SAN DIEGO (KABC) -- The three victims who were fatally crushed by a bluff that collapsed at an Encinitas beach Friday were all family members, sources tell ABC News.

San Diego County's medical examiner office identified two of the victims as 35-year-old Anne Clave and her mother, 65-year-old Julie Davis. Both of them died at Scripps Memorial Hospital in Encinitas after succumbing to their injuries sustained in the collapse.

The third woman who died on the beach was identified as Clave's aunt. Sources tell ABC News the family was there to celebrate the aunt who had just overcome cancer.

The bluff fell onto the group of beachgoers at 3 p.m. Friday north of the Grandview Beach staircase, just below South Ponto State Beach, according to the San Diego County Sheriff's Department.

The chunk of cliff that collapsed is about the size of a bus, geologist Dr. Pat Abbott told ABC affiliate KGTV.

The City has confirmed that two of the three victims that were transported to local area hospitals earlier today have succumbed to their injuries. This brings the total fatalities from this incident to three. Beachgoers should continue to use caution when visiting beach areas. pic.twitter.com/sTQdhQZIKh

City officials have closed the beach from Ponto Beach in Carlsbad to the area south of Grandview Beach and asked that the public avoid the affected area.

Encinitas lifeguards said the area around the slab of cliff wall that collapsed is still active, and they were working to assess the rock's stability.

"We are devastated by the tragedy today and our hearts go out to the victims and their families. We stand ready to help in any way possible. Our engineers and the public safety team are diligently working to assess bluff conditions," Encinitas Mayor Catherine Blakespear said.