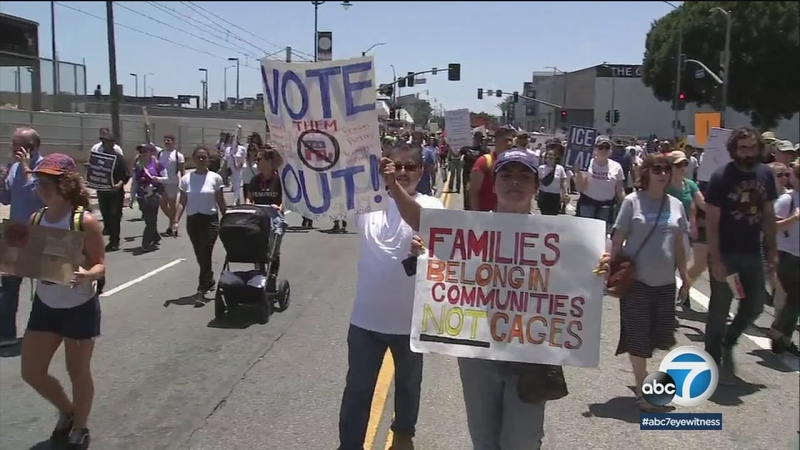 Thousands rally in LA for Families Belong Together march

DOWNTOWN LOS ANGELES (KABC) -- Some big-name celebrities teamed up with political leaders and activists on Saturday for the Families Belong Together- Freedom for Immigrants March in Los Angeles, one of hundreds being held nationwide.

The massive demonstration was aimed at sending a message about the Trump administration's zero-tolerance immigration policy that separated children from their families at the border. Protesters demanded that government officials reunite those families as quickly as possible.

Singer John Legend and his wife Chrissy Teigen took part in the rally and march, which kicked off at 11 a.m. at L.A. City Hall and ends in front of an immigration holding facility on Aliso and Alameda streets. Other famous names who attended the event include Eugenio Derbez, Laverne Cox and rapper Taboo.

Rapper Taboo sang "Where is the Love" as thousands cheered at the Families Belong Together march in Los Angeles on Sunday.

Rep. Maxine Waters delivered a strong speech in front of the large crowd of tens of thousands, calling for President Donald Trump's impeachment and responding to the death threats made against her.

Rep. Maxine Waters speaks at the Families Belong Together march in Los Angeles on Saturday.

"If you shoot me, you better shoot straight. There's nothing like a wounded animal," she said. "I am not about to let this country go by the way of Donald Trump. We are sick and tired of him. He's been there too long. They dared me to say impeach him. Today I say impeach 45!"

Activists, including many young speakers from groups such as Coalition for Humane Immigrant Rights of Los Angeles and Black Lives Matter to name a few, also spoke and shared personal stories of perseverance.

Born in Guatemala, Melody Kinglenfuss started her speech saying, "My name is Melody, and I am undocumented, unapologetic and unafraid."

"We will not stop until all the families are judged by the content of their character and not the possession of a legal piece of paper," she said before leading a loud chant: "Trump, where's your heart!"

Trump supporters said they, too, were holding a rally where the Families Belong Together march was set to end at 2 p.m.

The local demonstration comes just days after dozens were arrested when protesting a visit from Attorney General Jeff Sessions in Southern California. Demonstrators in white clergy robes linked arms across the street and chanted "reunite," others waving signs that bore slogans, among them, "Stop separating families."

Trump has rescinded his policy of separating children from their parents, but there is no word on when those who have already been separated will be reunited.

"It's been incredibly heartbreaking to see children being held in detention centers and being put in court rooms by themselves. I mean, it's heartbreaking, and it's not the values that our country stands for. So that's why we're here today, to really reclaim that and say, 'This is not what we want to see,'" said protester Marya Bangee.

More than 700 marches on Saturday drew hundreds of thousands of people across the country, from immigrant-friendly cities like Los Angeles and New York City to conservative Appalachia and Wyoming under the banner Families Belong Together.

Though many who showed up are seasoned anti-Trump demonstrators, others are new to immigration activism, including parents who said they felt compelled to show up after heart-wrenching accounts of children forcibly taken from their families as they crossed the border illegally.

For a map of the march in Los Angeles, click here.