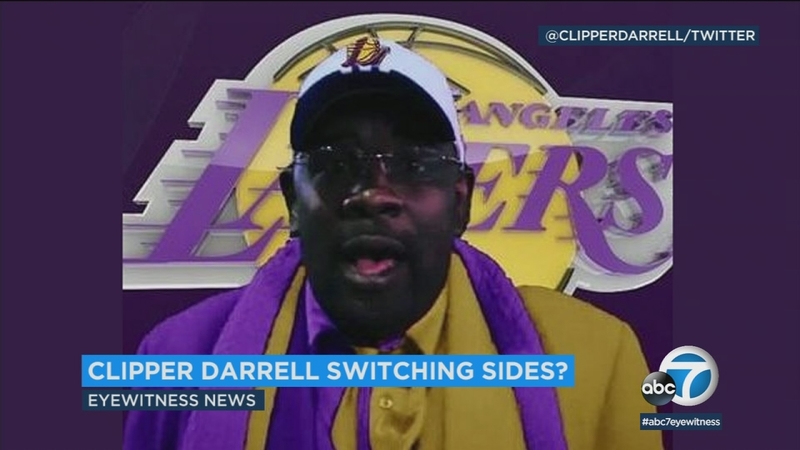 LOS ANGELES (KABC) -- It appeared to be the latest free agency move shaking up the NBA.

But this one had nothing to do with the actual rosters.

Clipper Darrell - known for his decades of loyalty to the Los Angeles Clippers through one losing season after another - is throwing some of his support to LeBron James and the Lakers.

Darrell Bailey posted a picture of himself in a Lakers purple-and-gold suit, with the caption "When @KingJames Calls you and says "ITS TIME FOR CHANGE"!!!"

When @KingJames Calls you and says "ITS TIME FOR CHANGE"!!! pic.twitter.com/rEgUe8Vrpm

The tweet sent local basketball fans into a frenzy, with some condemning him for jumping on the bandwagon. Others welcomed him to the Lakers.

But not so fast.

It appears the move was more a sign of respect than an indication he's dropping the loyalty he's maintained for more than 25 years.

He said he has a segment on his radio show "Where fans should respect fans of other teams."

Yo @Kuz NEVER! I Bleed Live & Drive Red White & Blue!! How can I LEAVE my team I loved for 25 seasons! I have a New Segment on my Radio Show @Fan_Truth on @Dash_Radio called "Loyal to the Soil" Every Saturday from 11am-1pm "Where Fans Should Agree to Disagree without Fighting!!! pic.twitter.com/vnUl0Ockbv