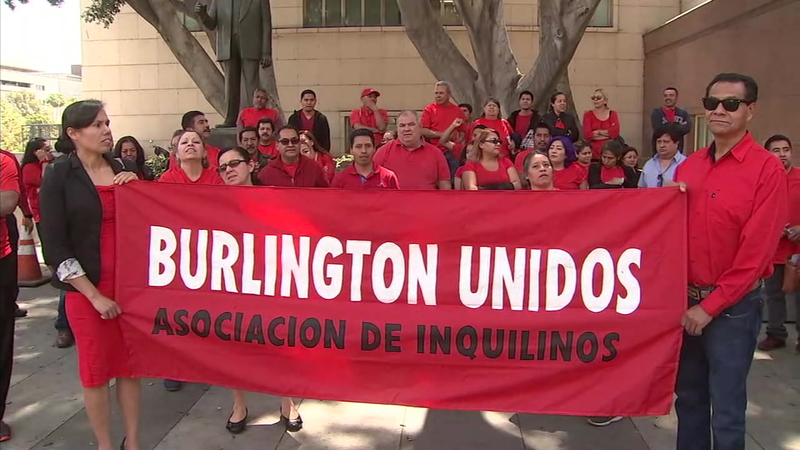 WESTLAKE, LOS ANGELES (KABC) -- Dozens of Westlake tenants are refusing to pay their increasing rent in buildings that are infested with rats, roaches and mold.

The Burlington Apartments tenants have joined a strike organized by the Eviction Defense Network, claiming in court that their landlord has failed to provide a habitable living environment.

"It's not fair. It's not just and it's not humane," Michelle Garcia said.

She's part of a group of 87 families that took part in the protest.

A lawyer for the landlord said there has been no intention to evict the tenants since rents were raised by 25 to 40 percent in January.

The landlord has continued to dispute the tenants' claims by arguing that rent had not been raised in nine years and the increase was consistent with the cost of living, which had been less than market rate.

There are approximately 192 units in the complex. Half of those tenants have joined the strike. By Friday night, they had been out for about five hours chanting, lighting candles and holding up signs demanding better living conditions.

Others are reportedly reluctant to join because they are immigrants and don't want to go to court.

Of the 87 families, 10 have settled their evictions, five won their court cases and three lost.

"The latest one - the place is worth $1 a month, according to that jury. The landlord keeps saying we're exaggerating, well that jury obviously agreed with us," Elena Popp said.

The group said they won't go anywhere and set up tents on the sidewalk. They planned to strike all night long.