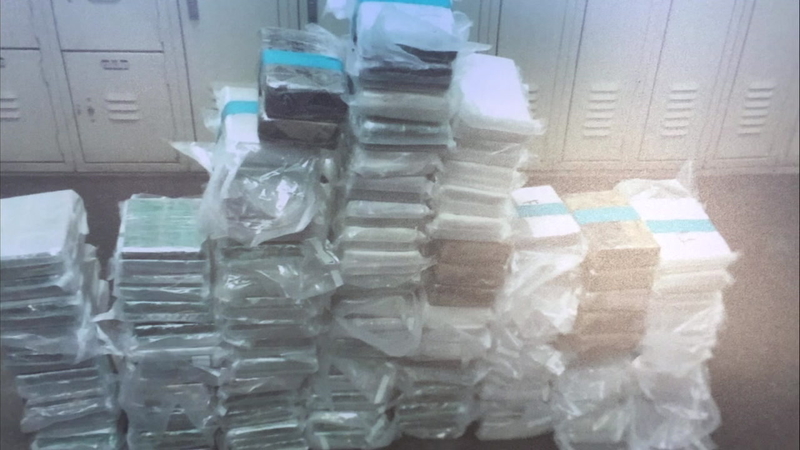 DOWNTOWN LOS ANGELES (KABC) -- Multiple federal agencies in Los Angeles announced Wednesday 22 people were arrested and accused of smuggling large amounts of drugs from Mexico to the U.S. on behalf of the Sinaloa Cartel.

Capping a three-year investigation by the Los Angeles Strike Force, officials said those arrested are among 57 defendants named in three indictments that were unsealed Wednesday. The remaining 35 are fugitives, many believed to be in Mexico.

The investigation, dubbed Operation Narconetas, targeted three drug trafficking organizations that allegedly transported bulk quantities of cocaine, methamphetamine and heroin from Mexico to the L.A. metropolitan area and other locations across the U.S.

"In this case, the transportation was accomplished through the use of small aircraft and the hidden compartments of traps and vehicles coming across the border," explained FBI Los Angeles Assistant Director in Charge Paul Delacourt.

JUST IN: @FBILosAngeles arrest 18 - and seize 850 lbs of meth, nearly 1 ton of cocaine, 93 lbs of heroin, almost 50 lbs of marijuana and $1.42 million in Operation Narconetas. More details to come... @ABC7 at 11:30am. #abc7eyewitness pic.twitter.com/UnbDSAnQIU

As a result of Operation Narconetas, authorities seized approximately 850 pounds of methamphetamine, nearly one ton of cocaine, 93 pounds of heroin, almost 50 pounds of marijuana and $1.42 million in U.S. currency. A lot of it was found in stash houses, officials said.

The FBI, DEA, IRS and U.S. Marshals were all involved in the early morning raids. The agencies set up a command post in downtown Los Angeles.

Prosecutors said the drugs were sold in L.A. and elsewhere.

"We hope that by addressing this through drug conspiracy investigations that we are going to eliminate the associated violence that goes with drug trafficking in our communities," Delacourt added.