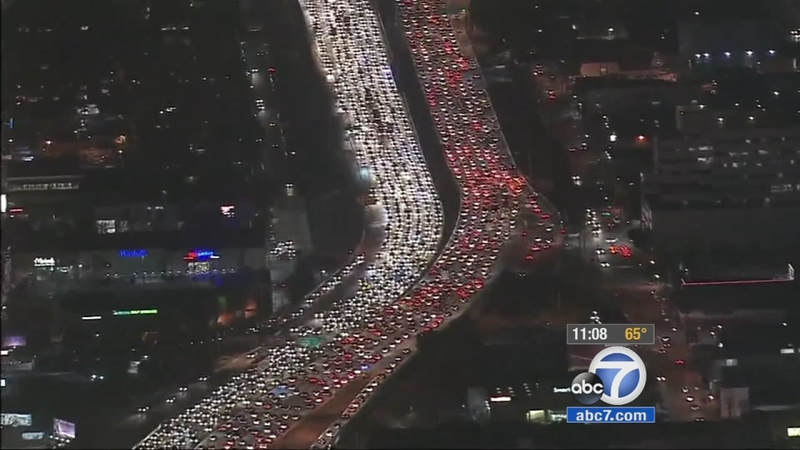 LOS ANGELES (KABC) -- It took five years and millions of dollars to expand the 405 Freeway, but did the project improve traffic?

On the northbound 405 Freeway, cars move slowly in the Sepulveda Pass even when it's almost 8 p.m. on Tuesday.

Traffic congestion on the freeway was supposed to improve with the new HOV lane, which starts from the 10 to the 101 freeways.

But many drivers said they've seen little benefit from the $1.1 billion project, which included the new lane, rebuilt bridges and revamped on-ramps.

"It's not better at all," Sherman Oaks resident Ruvin Spivak said. "I've got three or four on-ramps that I can choose from now and I still get stuck any which way you go."

According to the traffic analytics firm Inrix, the average time it takes to commute on the northbound 405 in the Sepulveda Pass is about 35 minutes at night. That is only one to two minutes faster than it was before the carpool lane was added.

But Inrix found that the evening commute in the general lanes was about five minutes faster after 7 p.m. thanks to the new lane.

Congressman Brad Sherman, whose district includes the pass, said the 405 remains one of the most congested freeways in the U.S.

Those possible solutions cost money. Some drivers said as a way to help ease congestion at no cost, slow drivers should stay to the right and everyone should stop rubber-necking when they see a car accident.

"They all stop and they're all looking, what causes again traffic, you know? So it all starts with the people that live in L.A. Learn how to drive man!" J.D.B. of Manhattan Beach said.