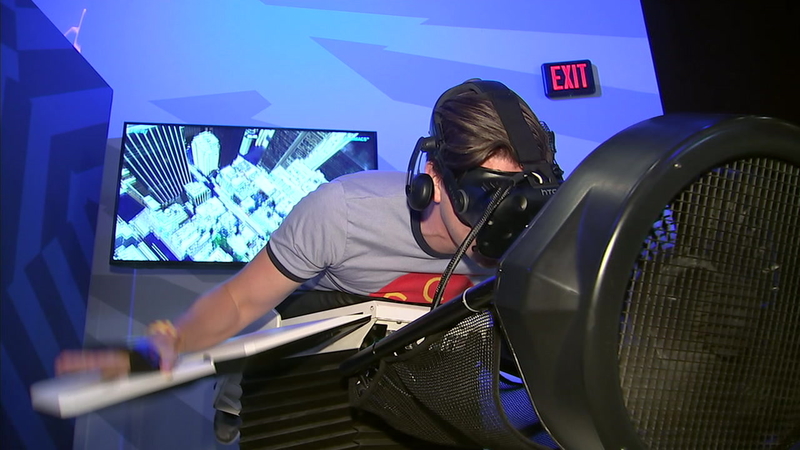 LOS ANGELES (KABC) -- There may not be a big-top tent, but the circus has arrived in Los Angeles.

"We wanted to get people back together in public again," said Two Bit Circus' CEO and co-founder Brent Bushnell. "And part of that was having people playing in real life, you know? Playing real big games."

There is a lot to do. From an old-school arcade, to virtual reality games that include escape room-style adventures, to a 100-seat trivia theater. There is a restaurant and a bar complete with a giant eyeballed robot bartender named Gearmo del Pouro.

"All of these games, the VR included, is meant to be played with groups of people," said Two Bit Circus' other co-founder Eric Gradman. "This is a place about getting you and your friends together, elbow to elbow to play."

The two have been working together for more than a decade, originally creating attractions for companies like Warner Brothers, Nickelodeon and Intel.

They decided to do it full time, and that's how Two Bit Circus was born. So far, it's a hit.

It took a lot of time and different sources of inspiration to develop.

"We looked at everything," said Two Bit Circus game designer Malika Lim Eubank. "Circuses -- old, new -- VR, experimental art festivals, Burning Man, and we kind of made this original thing, and we're very proud of it."

Former NBA star Baron Davis was also on hand for the grand opening. Others will be able to begin attending beginning Friday.

"I'm obsessed with this category of entertainment," Bushnell said. "I've looked all over the world, and I'm happy to say I haven't found something similar."

"To see people having fun -- I'm surrounded by happy people playing our games," Gradman said. "This is a wonderful day."