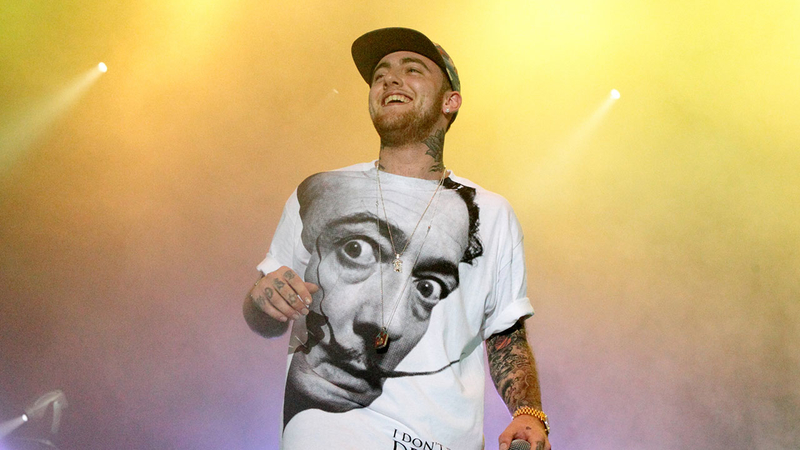 Mac Miller dies in his Studio City home at age 26

LOS ANGELES (KABC) -- Mac Miller, the popular rapper who often talked about depression and drug use in his lyrics, died Friday at the age of 26.

Law enforcement vehicles were seen parked along Valleycrest Drive near the home of the rapper, whose real name is Malcolm James McCormick.

The Los Angeles County coroner said McCormick was found unresponsive in his home in the late morning hours. He was pronounced dead at the scene at 11:51 a.m.

The coroner's van arrived on scene shortly before 2:30 p.m. Sometime around 4 p.m., McCormick's body was placed into the van.

His family released a statement regarding the hip-hop star's death, but did not release details on how he died.

Warner Bros. Records also released a statement, saying in part that McCormick was "a hugely gifted and inspiring artist."

The coroner said the cause of his death had not been determined and an autopsy was pending.

Even after McCormick's body was removed, investigators continued going in and out of his home.

One rapper named Pittsburgh Slim was around the borders of the police tape near the home.

Slim said he wasn't a close friend of McCormick but said he was a kind person and had a good sense of humor.

Back in May, McCormick was arrested for allegedly driving under the influence following a crash in Studio City.

Mac Miller was arrested on suspicion of DUI after the SUV he was driving slammed into a pole in Studio City and he allegedly fled the scene.

McCormick and pop star Ariana Grande had broken up earlier that month, with Grande tweeting afterward: "pls take care of yourself."

McCormick's last tweet was posted at 6:45 p.m. Thursday about his upcoming tour, set to begin in October. The first date of the tour was set to start in San Francisco.

Go get tickets for tour.

The show is going to be special every night.

I wish it started tomorrow.

While McCormick didn't have a hit on Top 40 radio, he had a strong following on streaming networks and even had an album debut at No. 1 on the top 200 albums chart. He often alluded to his battles with addiction over the years and had collaborations with Kendrick Lamar, Lil Wayne and Ty Dolla $ign.

At the news of his death, Chance the Rapper tweeted: "I don't know what to say Mac Miller took me on my second tour ever. But beyond helping me launch my career he was one of the sweetest guys I ever knew. Great man. I loved him for real. I'm completely broken. God bless him."

I dont know what to say Mac Miller took me on my second tour ever. But beyond helping me launch my career he was one of the sweetest guys I ever knew. Great man. I loved him for real. Im completely broken. God bless him.

J Cole said on Twitter: "This is a message for anybody in this game that's going through something. If you don't feel right, if you feel you have a substance problem, if you need a ear to vent to. If you uncomfortable talking to people around you. Please reach out to me."

This is a message for anybody in this game that’s going through something. If you don’t feel right, if you feel you have a substance problem, if you need a ear to vent to. If you uncomfortable talking to people around you. Please reach out to me.

Music blogger and photojournalist Sarah Moore said she met McCormick at nearby Crave Cafe, where his music played after news of death Friday night. Moore and employees at the business described the artist as a kind, friendly and humble man who would often stop by and hang out.

"He was always so happy and positive when he came down here - down to earth," said Crave Cafe employee Mitchell Blade. "He'd order a ridiculous amount of coffee at 8 p.m. at night. It's just hard to hear that that's how he went."

The Pittsburgh native rose to fame with a frat-rap attitude in his mixtapes like "Best Day Ever" and his full-length album debut, 2011's "Blue Slide Park." His more goofy songs included "Nikes on My Feet," ''Kool Aid & Frozen Pizza" and "Knock Knock."

One of his biggest songs was the 2011 platinum-certified mixtape track "Donald Trump," which prompted a feud with the future president. He asked his fans not to vote for Trump, who was flirting with the idea of running for president then, and publicly supported the Black Lives Matter movement.