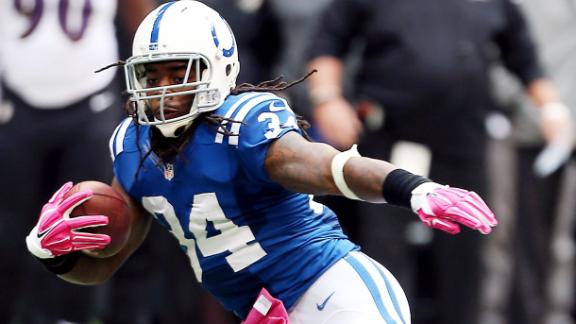 BEREA, Ohio -- Cleveland Browns coach Mike Pettine smirked Thursday when informed that two former members of the team vowed to jump in the Dawg Pound if they scored Sunday when his squad hosts the Indianapolis Colts.

"We're hopeful," Pettine said, "that they would be greeted appropriately by the Dawg Pound if those circumstances did occur."

"I think the Dawg Pound would have a response to that," Browns defensive coordinator Jim O'Neil said. "They might end up playing the rest of the game with beer all over them. If they want to do that, it might slow them down for us."

The two Colts who promised to make the Dawg Pound dive were running back Trent Richardson and special-teams returner Josh Cribbs.

Richardson was traded to the Colts a year ago in a surprise deal for the first-round pick that led to the Browns taking Johnny Manziel. Cribbs left the Browns after the 2012 season and was not re-signed this season even though Cleveland is averaging just 3.9 yards on punt returns, 31st in the league.

"I get in the end zone, get a touchdown, I'm going to jump in the Dawg Pound," Richardson told the Colts media. "I know I have some true fans out there, and I know they still love me."

Richardson was popular, but never as popular as Cribbs, who was beloved by fans as he set team records in returns after being an undrafted free agent who played quarterback at nearby Kent State.

"I received a lot of positive feedback on social media from the people in Cleveland and the community," said Cribbs, who lives in Cleveland. "They didn't care where I went. They were going to still support me. That's what I'm hoping for.

"You will definitely see me in the stadium hugging fans, and if I had the opportunity to score, I would jump in the Dawg Pound to honor those guys who helped create me. They helped give me the strength and the motivation to become what I am today."

To say Cribbs is eager would be an understatement. Asked what he would do if kickoffs are 9 yards deep, he said: "I know you're not asking me whether I'm going to bring it out."

The only opposing player in recent memory to make a modified Lambeau Leap into the Dawg Pound after scoring was former Bengals receiver Chad Johnson in 2007. He wound up doused with a cup of beer, but he didn't care.

Colts linebacker D'Qwell Jackson, who spent his first seven seasons in Cleveland, saw that scene. So he had a word of caution for Cribbs and Richardson.

"I'll tell you this," Jackson said. "If I ever make a play and I'm in the end zone, I'm definitely not jumping in the Dawg Pound. I can guarantee that.

"For me personally, I wouldn't go down that route."