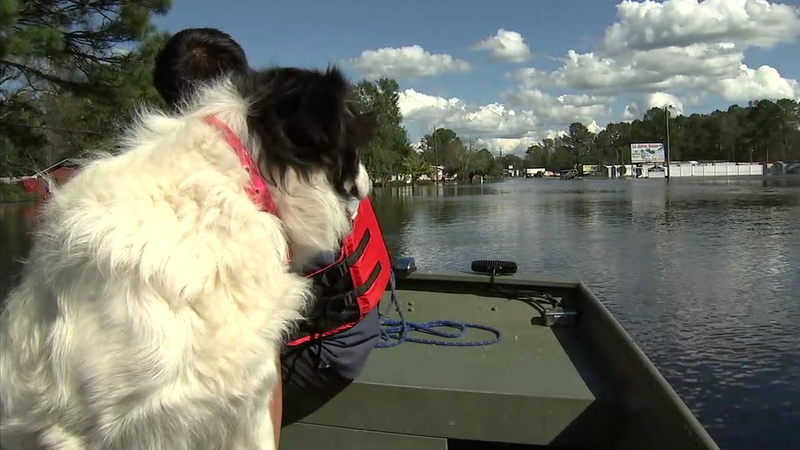 CHINQUAPIN, N.C. (KABC) -- Amidst the devastation left behind by then-Hurricane Florence, a moment of relief happened in Duplin County, North Carolina.

A volunteer firefighter rescued a dog from a flooded home in the small community of Chinquapin. The dog, named Duke, was reunited with his owner a short time later.

"They couldn't find the cat so I'm not sure where he's at, but I'm thankful they went in and saved (Duke)," the owner said.

Chinquapin is only accessible by boat despite the water level dropping several feet. Horses were left stranded, and people who live in the area just wait for the water to go away.

Areas such as this have kept a swift water rescue team, who came from Orange County to help, busy in the coastal plains.

"When you train for something like this - it breaks out heart when we see it happening and we're not there. Every one of these guys want to be there so a 61-hour drive was well worth it," said Craig Covey, an Orange County Fire Authority battalion chief.

The team is made up of Orange County Fire Authority, Anaheim and Orange firefighters.

"From the get-go as soon as we got here we had awesome hospitality from everyone around here. We were able to really use our training and effect a couple of rescues," Dickens Tai said.

Those rescuers came just after the eye of Florence passed through their position. In one case, saving an elderly man who was holding onto a tree to stop from being swept away by floodwaters.

"He looked pretty frail and pale. I think if we had waited a little bit longer he might not have made it," Tai said.

The firefighters also saved animals, such as Duke, and rescued a rabbit from rushing waters. It was released into a safer area. The entire rescue was captured on video and has gone viral.

The team is just glad to provide a hand during the chaos.