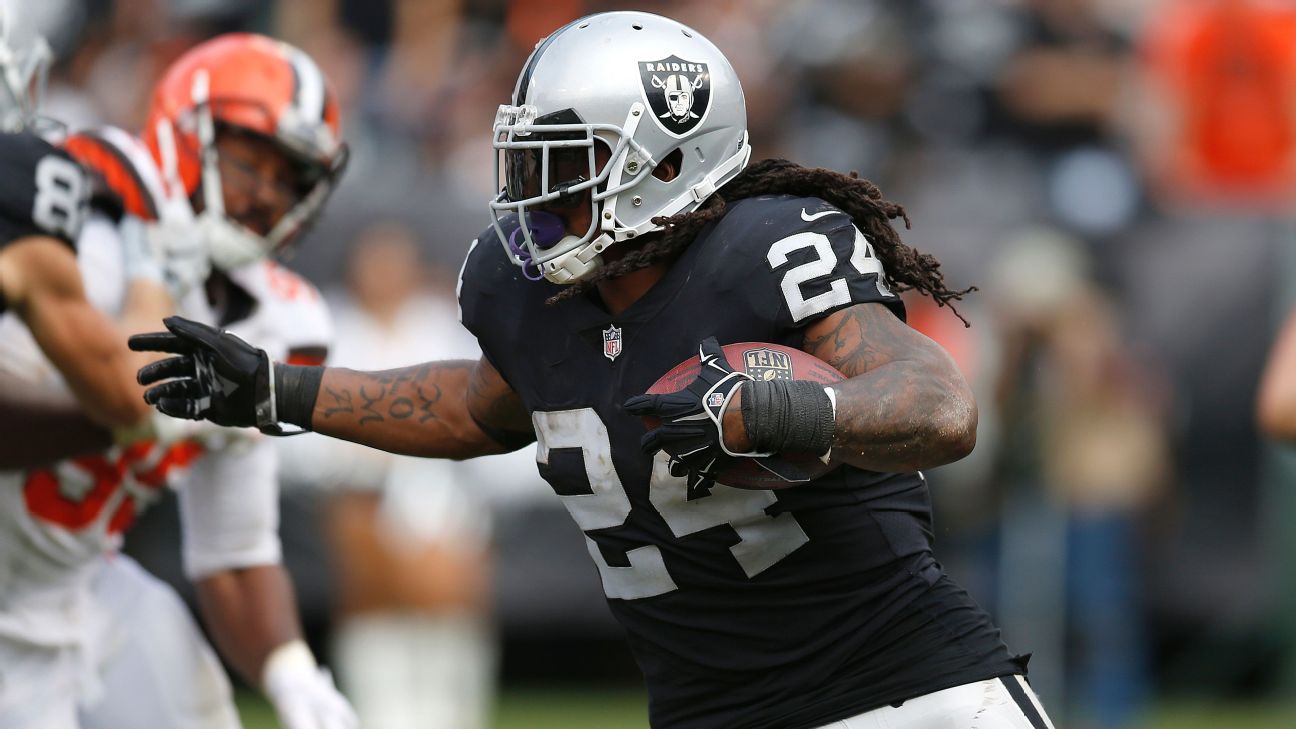 ESPN
By Paul Gutierrez
ALAMEDA, Calif. -- Fears that Jon Gruden and Marshawn Lynch could not co-exist with the Oakland Raiders are dissipating with every Beast Mode moment.

That's especially true after Lynch's hard-charging performance in the Raiders' 45-42 overtime victory against the Cleveland Browns on Sunday, a game in which Lynch rushed for 130 yards, his highest output since going for 140 yards for the Seattle Seahawks against the New York Giants on Nov. 9, 2014.

"If that's not a Hall of Fame back, I don't know what is, honestly," Gruden said Monday in his weekly media conference. "I mean, what he did yesterday, what he's done since he's been here, it's incredible. He wants the ball more, and more, and more.

"We've got a good back over there, Doug Martin, who's ready to roll. And Doug can't get on the field. This guy (Lynch) does not want to come off the field. He picked up six or seven blitzes yesterday, too, that no one's talking about. But some of the runs? Good night."

Lynch forced 11 missed tackled by the Browns, per Pro Football Focus, and leads the NFL with 22 missed tackles. He is third in the NFL with 3.74 yards after contact per attempt among running backs with 40 or more touches.

His 300 rushing yards on the season are fourth-most in the NFL, though he no doubt leads in the unofficial category of most violent runs after he had a potential 75-yard TD run taken away by an early whistle when his legs were still churning.

Lynch seemed to run angrier than usual after being ruled down in the second quarter.

"Why would you have a quick whistle, with Marshawn Lynch?" Gruden asked. "I don't understand how you can blow a whistle like you did yesterday. But some of the runs he's making, some of the finishes that he's putting on tape, it's unbelievable. I don't see many guys run like this."

Lynch is doing this at age 32, in his second year back from a one-year retirement in 2016.

Through the first half-season of his return last year, Lynch seemed more problematic for then-coach Jack Del Rio, especially when he ran on the field to protect then-Kansas City Chiefs cornerback Marcus Peters, his cousin, from other Raiders players after a hit on quarterback Derek Carr.

Lynch had to serve a one-game suspension for making contact with a game official in the ensuing melee and then practiced with a high school football team during the week away, to Del Rio's chagrin.

But when Lynch returned, he was the Raiders' best offensive player the last half of the 2017 season and has been a leader under Gruden. Late in the first half of the Browns game, Lynch gave an impassioned speech to Oakland's offensive line on the sidelines.

He also made a rare media appearance following last week's loss at the Miami Dolphins.

"I think what's most important is that we rally behind each other, more than anything," Lynch said at the time. "If you are on the outside looking in, it looks terrible. But we know what we have in this locker room. So if we get behind each other, I think we'll be able to turn this around."

Gruden said he has no concerns with Lynch's workload, despite his age and how hard he runs, seemingly looking to punish would-be tacklers with aplomb.

"Not until he tells me," Gruden said. "I just keep patting him on the back, 'Hey, get ready to go.' I check on him periodically, and when he can't go, we go to Doug. Jemal Singleton, our running back coach, has done a great job making sure that Marshawn is in the game when he feels like he can be in a game. And when it's time to go toJalen (Richard), in some unique situations, we go to Jalen. And hopefully, in the coming weeks, we'll be able to get some two-halfback sets going, like we used to around here."