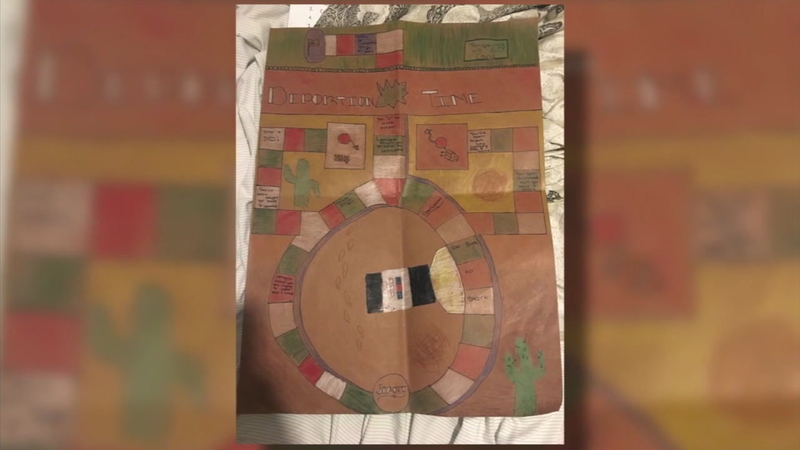 OCEANSIDE, Calif. (KABC) -- A class project at an Oceanside school stirred up some controversy as kids were supposed to create a board game and came up with one called "Deportation Time."

When the group got their project back, one of the students told his mother he was uncomfortable with it the entire time, especially because it targeted Mexicans.

Oceanside's Cesar Chavez Middle School prides itself on a safe, positive learning environment that promotes respect - but a parent there said that wasn't the case in a recent project.

"I screamed a lot of expletive words and basically felt like I wanted to throw up because it was so disheartening," Danielle said.

That was Danielle's reaction when her son showed her the board game.

"Basically themed as the desert and the Mexican flag. It just kind of made my stomach turn," she said.

Danielle, who did not want to provide her last name, shared the game rules. The objective is to be the first player to cross the border into the United States, while trying to avoid border patrol checkpoints. Blowing up the border wall to cross is mandatory.

"I really feel like the teacher should be held accountable for this because one, she missed a wonderful teaching opportunity to tell kids this isn't the correct way to think about this subject," Danielle said.

Danielle said the board game theme was approved by the teacher and that she provided no comments when handing it back. The mother said her son had tried to push the group in a different direction.

"I was really, really proud that he stuck his neck out there, to show it to me, to show me exactly why he felt uncomfortable," she said.