Lightning lights up SoCal skies; knocks out power in LA 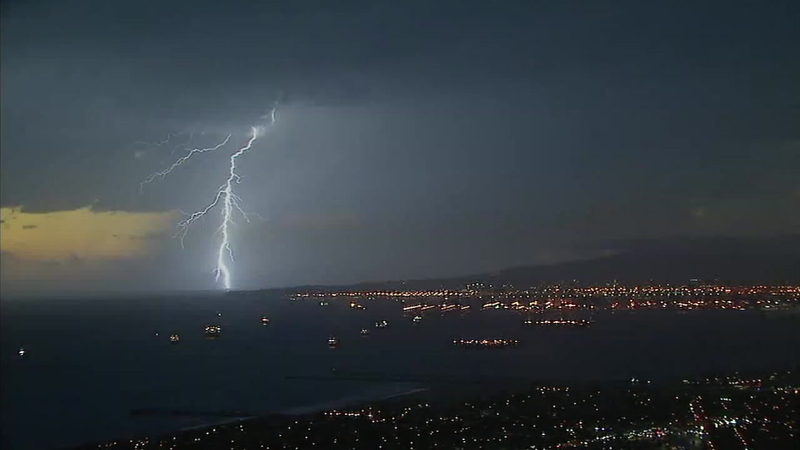 Lightning lights up SoCal skies; knocks out power in LA

LOS ANGELES (KABC) -- Lightning streaked across the skies around the Los Angeles area Friday night, creating a spectacular - but dangerous - light show just off the coast.

The National Weather Service and local fire agencies were urging people to stay inside and seek shelter, noting that lightning can strike 10 miles away from a thunderstorm.

Per @NWSLosAngeles : Numerous dangerous lightning strikes are approaching the Long Beach Area and Palos Verdes Peninsula. Stay indoors over the next few hours until these thunderstorms pass. WHEN THUNDER ROARS STAY INDOORS.

About 10,000 customers in Los Angeles were without power, according to the Department of Water and Power. Field crews were working to restore service.

There are approximately 10,000 customers without power. We apologize for the trouble. Our field crews are working hard to restore power as quickly and safely as possible. <js>

Radar images showed a cluster of moisture hanging just off the shore between Avalon and Dana Point Friday night.

A sudden rainstorm and lightning strikes caused the cancellation of a few high school football games going on around the Southland Friday night.

The game didn't even make it to halftime.

"We saw the lightning getting closer and closer until it was just literally right within our sight," one woman said.

Many viewers shared photos and videos of the rain and hail coming down on fields around the Southland.

At the Banc of California Stadium, the Thai soccer team, where the young boys and their soccer coach were trapped in a cave for nearly three weeks, were again trapped in a storm during the game.

The forecast calls for more rain and cool temperatures around SoCal on Saturday.