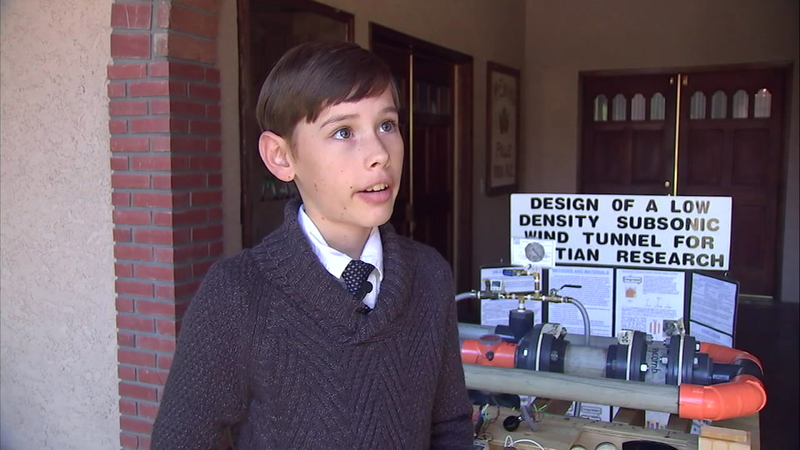 RIVERSIDE, Calif. (KABC) -- James Fagan is still a pre-teen but is already working toward his future. He hopes to one day hop on a mission to Mars.

James is a student at Riverside Stem Academy. The 12-year-old freshman in high school designed a wind tunnel to test out how aircraft would operate on Mars.

The atmosphere on the red planet, as he explained, is about 1/100th as dense as the Earth's.

"(It) basically means we have to create approximately 100 times the lift that we would have to on Earth," James said.

Mars has been a passion of his. The science experiment is related to one he started when he was 10-years-old.

"I am really interested right now in working on the Mars mission. There's so many applications for just exploring the terrain. Right now, I am working on a Martian drone," James said.

James is currently working on a patent for his Mars drone. The project earned him a trip to Washington D.C. to compete in the Broadcom Foundation and Society for Science & the Public. He'll be up against 30 other top young scientists in the nation.

Fagan said he drew inspiration to build the wind tunnel following a trip to the Home Depot.

"I was in the plumbing section and started playing with drain pipes, and I assembled, basically, a makeshift tunnel. It gave me an idea," he said.