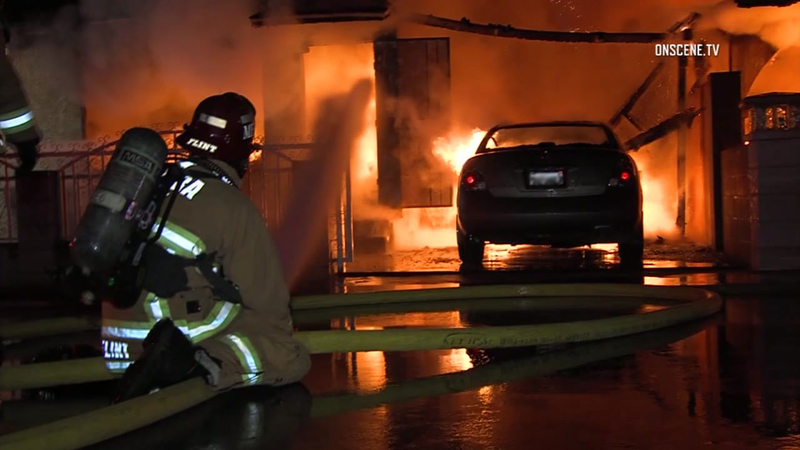 Shortly before 1 a.m., a two-alarm blaze broke out in Cabrillo Village, located in east Ventura, according to the Ventura Fire Department.

The fire resulted in two houses being consumed by fire and an adjacent home being damaged. About four cars were also damaged.

Fire officials said the homes in the community are very close in proximity, so firefighters worked in coordination to address the main structures on fire and keep other homes from igniting.

Ventura and Oxnard fire crews quickly got to work, as Ventura police helped with evacuations. 911 callers reported seeing smoke and flames from the city of Oxnard, fire officials said.

Four people were hurt in the incident, two critically and two with moderate injuries. All are reportedly from the same house that initially caught fire.

Powerlines fell along the side of a row of homes that were threatened, exposing arching wires that hampered firefighting efforts, but all occupants of the second home that caught fire evacuated quickly without being hurt, officials said.

A third home to the rear caught fire due to the heat, but fire suppression efforts successfully stopped the progression of the blaze. Only about 20 percent of the home was damaged.

A total of 15 people were displaced due to the incident, with the Red Cross providing them assistance.

Initial estimated damages are over $500,000, not including vehicles, officials said.