What does it mean to lie in state? How esteemed Americans are honored in the rotunda of the U.S. Capitol 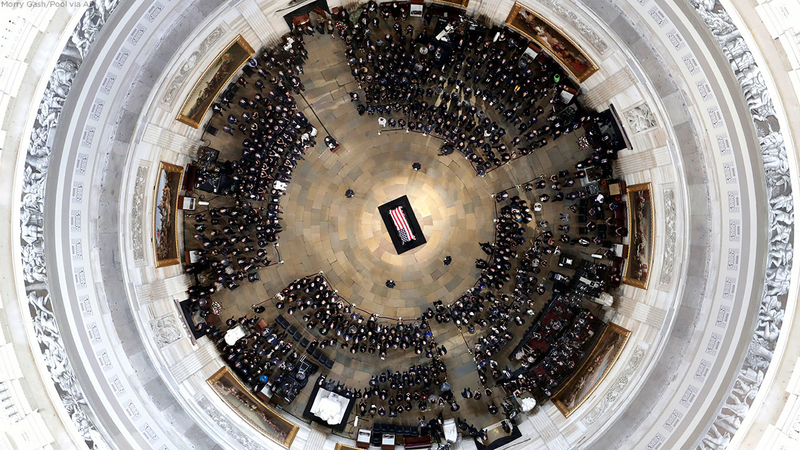 What does it mean to lie in state or lie in honor?

WASHINGTON -- Following the passing of a high-profile figure, there are two similar commemorations at the Capitol that have one key difference: government and military figures lie in state while private citizens lie in honor. The phrases can also be used to describe similar ceremonies at state capitols and other government buildings.

Sen. Henry Clay was the first person to lie in state in the rotunda on July 1, 1852. In the years since, only a select few Americans have joined the ranks of those honored in the rotunda. The list of those to lie in state or honor includes presidents like Abraham Lincoln and John F. Kennedy, legislators like John McCain and Daniel Inouye, military figures like Douglas MacArthur and various other "eminent citizens" like Rosa Parks and Billy Graham.

"The Rotunda of the United States Capitol has long been considered the most suitable place for the nation to pay final tribute to its most eminent citizens," according to the Architect of the Capitol, the agency tasked with managing the Capitol grounds and events.

Many of the Capitol ceremonies for those to lie in state or honor have utilized the Lincoln catafalque that was built in 1865 to support the casket of President Abraham Lincoln. Apart from occasional alterations, the catafalque is "basically the same" as it was more than 150 years ago, the Architect of the Capitol said.

In a recent blog post, the Architect of the Capitol described what goes into preparing the rotunda for a ceremony:

"Ceremonial stanchions are cleaned and polished, the floors of the Rotunda are buffed and waxed, stone entrances to the U.S. Capitol Building are power washed, and lamps and other lighting is checked.

"The evening before the ceremony, which is hosted by congressional leadership, the AOC installs ceremonial stanchions, chairs, podium and media risers. A viewing queue is established and staffed within the Capitol Visitor Center and tables with condolence books put in place. Electrical and sound requirements are met and tested - including microphones on the podium and event lighting.

"Once the casket arrives at the U.S. Capitol, the AOC works with care behind the scenes to ensure the ceremony is successful and seamless to the attendees and the viewing public. Following the formal ceremony, the AOC rearranges the Rotunda to provide the public with an opportunity to pay their respects."