5 Freeway shut down on both sides due to mud flow 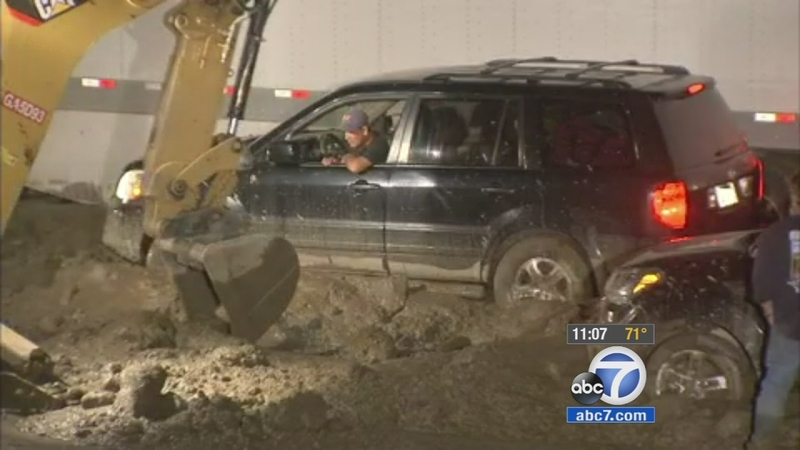 5 Freeway shut down on both sides due to mud flow

CASTAIC, Calif. (KABC) -- The northbound and southbound sides of the 5 Freeway were expected to remain closed throughout the night as crews continued working on a river of mud that was triggered by severe thunderstorms in north Los Angeles County Thursday.

Officials said the highway was expected to be closed through the Grapevine near Fort Tejon as several feet of mud and rocks covered both sides of the road. The powerful cell hit the area around 3 p.m.

Several drivers were trapped as mud, rocks and debris rushed across the freeway, blocking traffic and putting drivers in danger.

"Boulders were just coming down the mountain and we were just like, 'We can't see' and it was just really crazy," said Gabby Vasquez, one of the victims stranded.

Vasquez captured the storm as heavy rain and hail turned to a massive mud flow, trapping more than 100 drivers in their cars.

"We just started sliding, boulders starting coming," said Mike Martinez, another victim. "It was just quick, it happened quick, so, it was scary."

Drivers were stuck in their vehicles waiting and watching as crews worked on clearing the mess, but even after the mud is gone, authorities say the potential danger remains.

"We are going to have a geologist come out to inspect the sides to make sure they're stable and safe," said Patrick Chandler of Caltrans. "Obviously, with a lot of rain, you get a lot of saturation. So, sometimes slides don't happen on that first day, they happen later."

Highway 58 and sections of Highway 14 also had to be shut down. Authorities said they cannot be used as alternative routes at least until sometime Friday.