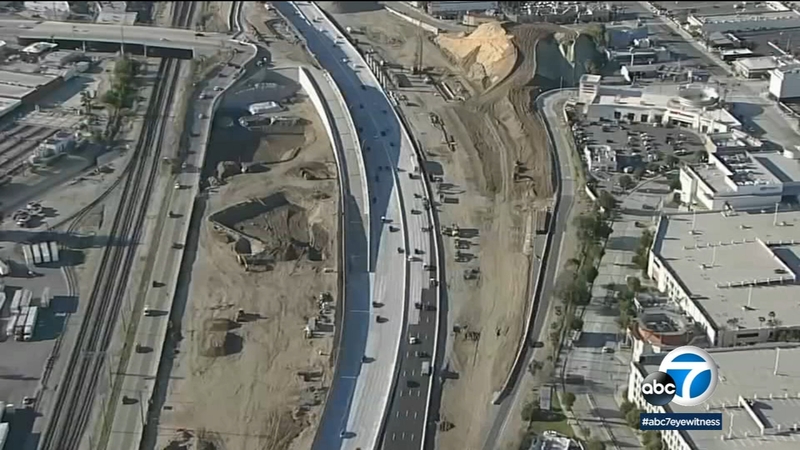 After years of delays, when will I-5 project in Burbank be done?

BURBANK, Calif. (KABC) -- If you've driven through Burbank on the 5 Freeway, you're probably seen a massive Caltrans project and its piles of dirt along the freeway. And you've been seeing it for far longer than you should have been.

This Caltrans project is known as the Burbank Bridge/I-5 project. For those who relied on this area to get on and off the 5 Freeway and to get over the freeway on the old bridge it's known as other things now - and they're not complimentary.

The $355 million project started in 2014. It was supposed to be done three years ago - but three years later it remains far from complete.

"The lack of moving this project forward in a timely schedule is very disappointing," Burbank Mayor Bob Frutos says. "It's frustrating. I don't blame my residents for being upset."

Chuck Mercier has owned the 76 station at the Burbank onramp to the northbound 5 for over 40 years. He calls the tall pile of dirt there his Burbank Mountain. This mountain of dirt has seriously hurt his business.

"It's taken about 85% of my business, my traffic away for fuel sales. And it's hard to survive on that. The automotive service bay has been open for almost 42 years now. And we're in the process of closing that also."

So why the delays?

In a statement to Eyewitness News, Caltrans says "As a result of added work to the project due to changes requested by Metrolink and the City of Burbank, and additional utility relocation work and changes to address changed field conditions, additional working days were added to the project."

Bottom line: Caltrans says when the project is finally done the added commuter lanes, widening of the freeway through here and construction of an elevated railroad crossing will hopefully ease congestion around the shopping centers and encourage more people to rideshare.

The agency says completion of the project is now expected in early 2022 - if all goes according to the current plan.

That means the lanes and onramps will be open to traffic. All of the work, which includes landscaping, will take more time.

Mayor Frutos says "I need Caltrans to know - you know what? Help us. Let's get this project done. We need this for the economic recovery of not just the city but the region."