The damage appeared more serious than it looked. When the garage exploded, it pushed walls off foundations, interior ceilings collapsed and some homes are now uninhabitable. The shockwaves blasted out windows in a home that wasn't even on the same block.

The incident happened Wednesday afternoon at a single-story home in the 7500 block of Sale Avenue. At first, officials thought the explosion may have been related to narcotics, but later determined it could be a gas leak.

SoCalGas said there was no leak in their lines and that the source of gas was more likely from pipes and fixtures installed by the homeowner. The person who rents the place was at the home at the time of the blast.

He said he was thrown off his feet and it felt like he was being tackled to the ground when the garage blew up.

Next door to the home is a day care center and debris landed all over the play area. The six children were indoors as window after window shattered from the force.

"The kids were just freaked out. They were scared. Some of them were crying. So I helped carry some of the kids outside to get them out. I said, 'We need to get everybody outside because we don't know what exploded at this time. Maybe something else will explode,'" neighbor Michael Paul said.

It was a total loss for one tenant who said he is more concerned for a dog named Truffles, who has not been seen since the explosion. 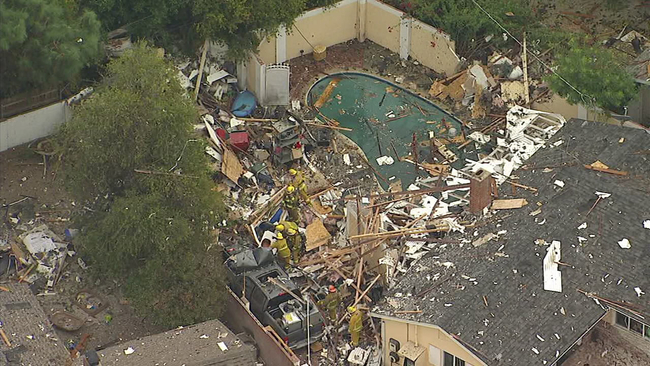