Amy Klobuchar: What to know about Minnesota senator, 2020 candidate

KABC
2020 Democratic presidential candidate Amy Klobuchar was born and raised in Minnesota and attended Yale University and University of Chicago Law School. She pursued a legal career before she was elected Hennepin County attorney in 1998.

In the Senate, she serves on the judiciary, economic, commerce, agriculture, printing, rules and library committees. By one ranking, she's cosponsored more bills and gotten more bills out of committee than her peers.

SEE ALSO: Who's running for president in 2020? List of Democratic candidates

Klobuchar raised her national profile during a Senate Judiciary Committee last fall for Supreme Court nominee Brett Kavanaugh, who was accused of sexually assaulting a woman when they were both in high school.

When Klobuchar asked Kavanaugh whether he ever had had so much to drink that he didn't remember what happened, he turned the question around. He asked Klobuchar, "Have you?"

"When you have a parent who's an alcoholic, you're pretty careful about drinking," she said. "I was truly trying to get to the bottom of the facts and the evidence."

A December poll had Klobuchar pulling 10 percent of potential Iowa caucus-goers, according to Politico. That put her in fourth place among potential Democratic presidential hopefuls, led by former Vice President Joe Biden with 30 percent, Sen. Bernie Sanders with 13 percent and Rep. Beto O'Rourke with 11 percent. 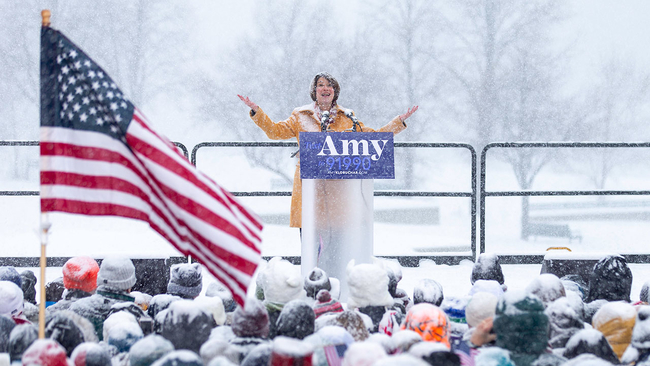