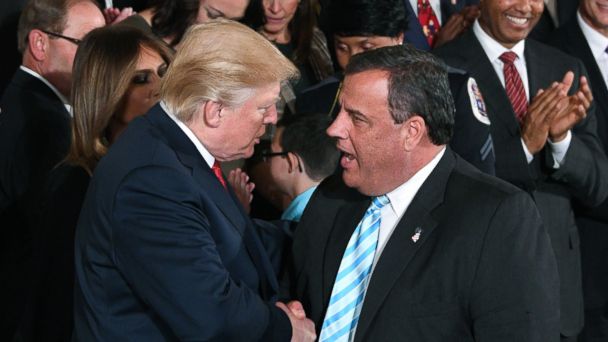 "He said, you know, Flynn's the only guy who spoke to the Russians apparently, so I think this is going to end it - and I just laughed," said Christie, who details what he said was a 2017 conversation with Trump and Kushner in his new book, "Let Me Finish: Trump, the Kushners, Bannon, New Jersey, and the Power of In-Your-Face Politics."

Christie, who was a former federal prosecutor before he served as governor, launched a GOP bid for president and then eventually led Trump's transition team, said he told Trump and Kushner that, based on his experience, the investigation wasn't going away.

"Mr. President, it's unfortunate that I have to tell you this, but having done this myself for a living - we're going to be talking about this on Valentines Day, February '18," Christie, an ABC News contributor, described of his conversation with Trump in an interview on "Good Morning America" on Monday. "And they laughed out loud, and Jared told me I was crazy."

"But they had no experience in government and no experience at this and what I was trying to do was help them and say, listen you guys need to get ready for a war," Christie continued.

Flynn pleaded guilty in 2017 to lying to the FBI about contacts with the Russians before he became a member of the administration. He submitted his resignation at the White House less than a month after Trump took office.

Christie said it's now clear that he undersold how long the investigation would last.

"We're gonna be talking about it on Valentines Day 2019, not just 2018, and I think they just didn't understand that," Christie said of Trump and Kushner.

Christie also maintained that the Trump campaign didn't actively collude with Russia but instead was "just trying to figure out how to get field people hired in places like Pennsylvania, let alone run some sort of Tom Clancy operation."

He said the lies that have been detailed around the Russia investigation stem from bad personnel choices.

"One of the president's biggest problems has been that some of the people he surrounds himself with have just not been good people," Christie said, citing Flynn, former adviser Steve Bannon and former aide Omarosa Manigault-Newman.

Roger Stone, a longtime friend of the president and political operative, was the latest in the president's circle to be arrested on Friday. The special counsel filed a seven-count indictment against him as part of the ongoing probe. Christie, speaking on "This Week" Sunday, called the indictment "pretty damning."