If Mick Mulvaney were president, we could have solved' border funding issue: Top Dem 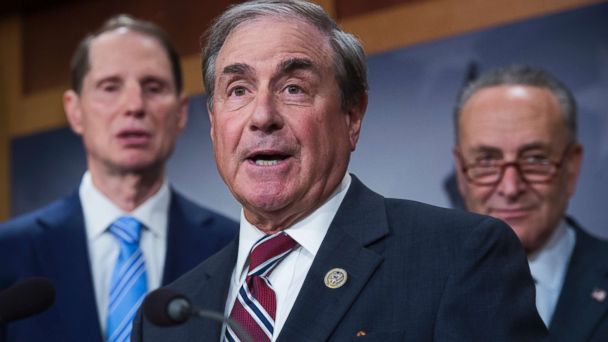 A top Democrat Rep. John Yarmuth, D-Ky., and Rep. Tom Graves, R-Ga., who is involved in negotiations over border security funding, agreed that there's no reason for the government to shutdown at the end of this week.

"If Mick Mulvaney were president, we could have solved it," Yarmuth told ABC News Chief Anchor George Stephanopoulos on "This Week" Sunday.

Yarmuth and Graves were part of a bipartisan group invited to Camp David by acting White House chief of staff Mick Mulvaney to discuss ways to bridge party divides.

On NBC's "Meet the Press," Mulvaney said Sunday that a shutdown was still possible.

"Let's say that the hardcore left wing of the Democrat Party prevails in this negotiation and they put a bill on the president's desk with, say, $0 for the wall or $800 million, some absurdly low number, how does he sign that?" Mulvaney asked.

Yarmuth, the chairman of the House Budget Committee, told Stephanopoulos that if the group at Camp David were left to their own devices, they "could have solved it in less than a day."

But Graves said an agreement has yet to be reached as the "goalposts have been moving."

"We were progressing well. I thought we were tracking pretty good over the last week. It just seems over the last 24 hours or so the goalposts have been moving from the Democrats," Graves said. "And at the end of the day we have an obligation -- that's to protect our nation, provide the proper border security. And as long as the goalposts continue moving, there's really no way we can lock in on an agreement."

Yarmuth said the Democrats aren't the only ones to blame and that goalposts "have shifted a lot on both sides."

"The numbers are all over the place," Yarmuth said. "I think the big problem here is, this has become pretty much an ego negotiation. This really isn't over substance. What needs to happen is Secretary [Kirstjen] Nielsen needs to come to the Hill and lay out her plans and be questioned on them so that we can figure out and try to come to an agreement on what the necessary security provisions should be and then we'll fund them."

Failure to reach an agreement could risk a government shutdown at the end of the week -- three weeks after the longest-running shutdown in U.S. history.

Negotiators were hoping to have a deal finalized before Monday to have enough time to vote on the measure in both chambers to prevent a government shutdown on Feb. 15. According to a report released by the nonpartisan Congressional Budget Office, the 35-day shutdown cost the economy an estimated $11 billion, $3 billion of which will never be recovered.

House Speaker Nancy Pelosi said previously there will be no funding for President Donald Trump's border wall in the legislation, disregarding his original demand for $5.7 billion.

Trump has stressed the need for border security, saying "it's not an option."

His calls for a wall along the U.S.-Mexico border come amid an 85 percent increase in arrests along the border compared to this time last year, according to U.S. Customs and Border Protection data released Friday. About half of the 200,000 people apprehended in the past four months were families.

Graves said numbers ranging from $800 million to $1.3 billion have been floated during discussions.

"So they are a little bit all over the board," Graves said. "It's not really what number am I looking for or what number is the president looking for, it's really what does Customs and Border Protection need? And that's what we're trying to get to."

Yarmuth added, "We have people of good will and intelligence and thoughtfulness who actually can negotiate all these things very easily, but then the outside world intervenes.

"And again, it's not just President Trump or Nancy Pelosi, it's also, you know, the right wing media, left wing organizations. We have so many outside pressures that make it very, very difficult for us to come to a logical compromise, and then sell it."
Report a correction or typo
Related topics:
abc newsnational
Copyright © 2020 ABC News Internet Ventures.
More Videos
From CNN Newsource affiliates
TOP STORIES