Six more years of Trump 'would be bad for the country': 2020 GOP hopeful Bill Weld 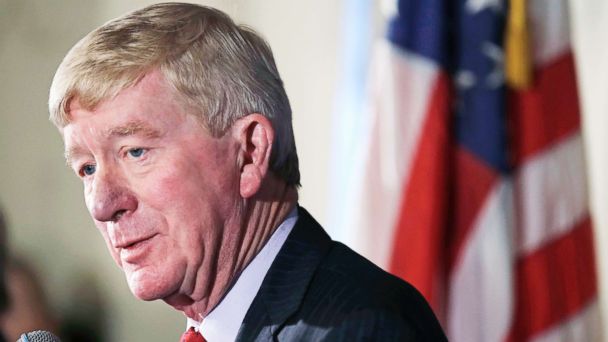 Bill Weld, the first Republican to announce a possible challenge to President Donald Trump in 2020, said that six more years of a Trump presidency "would be bad for the country."

The former Massachusetts governor said on "This Week" that his goal with a possible primary challenge wouldn't be to simply weaken Trump's candidacy. He said it was part of his thinking that, "we don't have six more years of the antics frankly, for want of a better word, that we've seen the last two years. I think that would be bad for the country and I don't care who knows it."

On Friday, Weld announced that he formed an exploratory committee, taking the first steps toward a Republican presidential run.

Weld criticized Trump's declaration of a national emergency in order to fund his 2016 campaign promise of a wall along the U.S.-Mexico border.

Trump "thinks he has to humiliate whoever he's dealing with or else he's half a man," Weld told "This Week" Co-Anchor Martha Raddatz. "The emergency declaration is just one example of that. Congress thought they had a deal. He says, 'Oh, you think you have a deal? I'm going to show you a deal. I'm going to show you who's boss.' It's just no way to run a railroad."

In order to avoid a second government shutdown after the longest-running one in U.S. history, Trump signed a bill Friday to fund the government. He also declared a national emergency that he said he "didn't need to do" in order to secure additional funds to build a border wall.

Trump's declaration is likely headed to the courts and lawsuits have already been filed challenging it.

"We're talking about an invasion of our country with drugs, with human traffickers, with all types of criminals and gangs," Trump said Friday.

"He wants to divide the country and hold up scary boogiemen," Weld said. "People getting through between the fences that are already on the border with Mexico are not a national emergency, and they're not a major national security threat to the United States. And I think everyone who studies the situation knows that. But it's pure rhetoric on his part without anything behind it."

Weld said Trump "is not indispensable at all" and that his "reckless" spending is jeopardizing the future of millennials and Generation X.

"If we don't do anything, then the door to the middle class is going to be shut on the working poor, which would be very bad for the country as a whole," Weld said. "That's the sort of thing they're not paying attention to in Washington, because they're so busy with divisiveness and trying to make everyone feel awful."

The 2016 Libertarian vice presidential candidate had previously said he was a "Libertarian for life" at the party's 2016 convention. However, Weld changed his party affiliation last month back to Republican.

The Republican National Committee made a pledge in January to give Trump its "undivided support" in his reelection efforts.

Noting that the latest ABC News/Washington Post poll showed the president maintains a 78 percent approval rating among Republicans, Raddatz asked, "Can you really get the support needed to seriously challenge?"

"I think the Republicans in Washington want to have no election basically," Weld replied. "I don't think that would be very good for the country."

According to the Associated Press, Weld isn't the only Republican thinking of making a run, and his move marks the first time a sitting president has faced a notable primary challenge within his own party since former President George H.W. Bush in 1992.

An incumbent president has not lost a bid for renomination by his party since Chester A. Arthur at the GOP convention in 1884, according to FiveThirtyEight.
Report a correction or typo
Related topics:
abc newsnational
Copyright © 2020 ABC News Internet Ventures.
More Videos
From CNN Newsource affiliates
TOP STORIES