KABC
ANAHEIM, Calif. (KABC) -- After a social media post by Anaheim Fire and Rescue went viral, the department is explaining and demonstrating why parking in front of a fire hydrant can be the difference between life and death.

The photos show a car parked in front of a hydrant during a recent apartment fire. Firefighters busted the windows and laid the hose through the car.

They say the post wasn't meant to be humiliating, but to educate.

"On Facebook we're over 2 million hits on it," said public information office Daron Wyatt. "Comments from around the world. (We were) contacted from media around the world including Italy, Holland, China."

While Wyatt says they received many supportive comments, some weren't happy with the firefighters' decision. Some called it a power trip and wondered why firefighters didn't go over, around or underneath the car.

"Each one of them creates a kink at the coupling of the hydrant and the hose, which reduces the flow of the water and therefore we cannot fight the fire," Wyatt said.

To better illustrate their point, Anaheim Fire and Rescue held a demonstration to show what happens when they lay the hose the way some suggested. They say the decrease in water pressure could have drastically changed the outcome of the apartment fire.

"Fortunately because of the quick and decisive actions of our firefighters they were able to extinguish the fire very quickly, they were able to keep it contained to just the kitchen of this one unit," Wyatt said.

Wyatt says the point of the post and the demonstration is simply to ask people to never park in front of a fire hydrant. They say it could be a matter of life and death.

"It could save the life of a resident or firefighter, it's critical people just need to think," he said.
Report a correction or typo
Related topics:
orange countyanaheimparkingfire departmentssocial mediafirefighters
Copyright © 2020 KABC-TV. All Rights Reserved.
RELATED 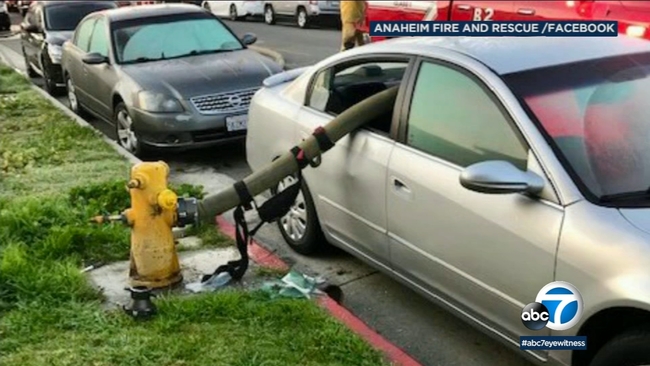