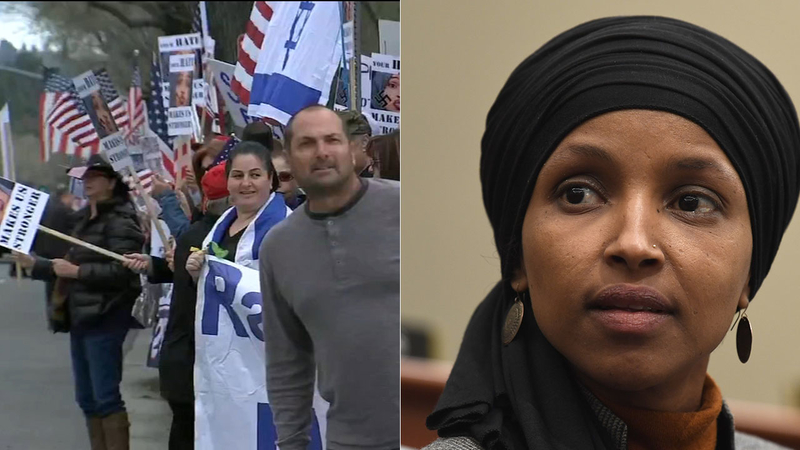 WOODLAND HILLS, Calif. (KABC) -- Minnesota Rep. Ilhan Omar attended an annual banquet for a Muslim-American civil rights group in Woodland Hills Saturday as protesters were on hand to voice their disapproval over the congresswoman's recent remarks they claim are anti-Semitic.

Dozens of protesters lined Canoga Avenue in front of a Hilton hotel where Omar was set to appear and speak to the Council of American-Islamic Relations.

In February, Omar came under fire for tweeting "It's all about the Benjamins baby" in reference to the financial support the U.S. traditionally offers Israel.

Omar later apologized, saying "anti-Semitism is real and I am grateful for Jewish allies and colleagues who are educating me on the painful history of anti-Semitic tropes."

A handful of Omar supporters also turned out. Supporters claim Omar is being unfairly targeted because she is black and Muslim.

"It is totally legitimate to criticize American foreign policy vis-a-vis Israel and Palestine," supporter Estee Chandler said. "I don't think anything she has said is anti-Semitic."

Omar received a standing ovation during her event. She told the crowd she found the protest ironic since many cite her religion as being oppressive to women.

"Today they gather outside to protest a Muslim woman who is in Congress," Omar said.