VIDEO: American tourist Kimberly Sue Endicott arrives back in Uganda after being kidnapped 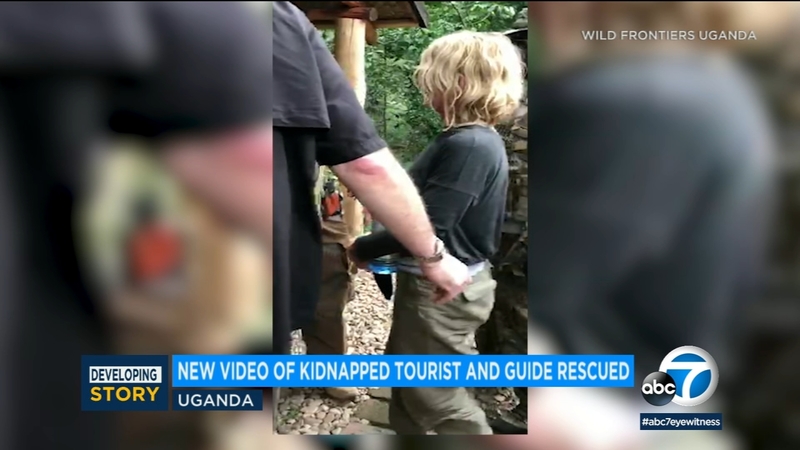 VIDEO: OC resident arrives back in Uganda after abduction

Endicott and her guide Jean-Paul Mirenge Remezo were freed Sunday in a negotiated handover after they were kidnapped for five days.

The release came after a ransom was paid with an unknown amount, but the gunmen originally used Endicott's cell phone to demand $500,000.

Kimberly Sue Endicott, a Costa Mesa resident who was kidnapped for ransom last week in Uganda, has been released safely along with her Congolese safari guide.

Other details of Endicott's release were not immediately disclosed, including the identity of the person or entity that made the payment.

President Donald Trump tweeted Uganda must find the kidnappers so people will feel safe going there.

"Uganda must find the kidnappers of the American Tourist and guide before people will feel safe in going there. Bring them to justice openly and quickly!" the president's tweet said.

Uganda must find the kidnappers of the American Tourist and guide before people will feel safe in going there. Bring them to justice openly and quickly!

Ugandan security forces launched a search for Endicott and the local driver after they were abducted in the wildlife park on April 2. They were ambushed by four gunmen in the park, a protected area near the porous border with Congo, according to Ugandan police and a government spokesman.
Report a correction or typo
Related topics:
orange countycosta mesaafricasafarikidnapu.s. & world
Copyright © 2021 KABC-TV. All Rights Reserved.
More Videos
From CNN Newsource affiliates
TOP STORIES