Notre Dame and Baylor still the story at WNBA draft

NEW YORK -- Sunday in Tampa, only one women's basketball program could go home happy. But Wednesday in the Big Apple, there was joy for both schools that had met in Florida for the national championship just three days earlier. Baylor and Notre Dame combined to have seven players picked in the 2019 WNBA draft.

National runner-up Notre Dame had all five starters drafted, including No. 1 Jackie Young by Las Vegas and No. 5 Arike Ogunbowale by Dallas. The only other time in draft history that five players from the same team were taken in the same draft was 2008 with Tennessee, which also had the No. 1 selection that year in Candace Parker.

National champion Baylor had two players selected: first-rounder Kalani Brown at No. 7 by Los Angeles and Final Four most outstanding player Chloe Jackson in the second round, at No. 15, by Chicago.

The other Irish players selected were Brianna Turner at No. 11 by Atlanta (then traded to Phoenix), Jessica Shepard at No. 16 by Minnesota and Marina Mabrey at No. 19 by Los Angeles.

"I think it's a historic moment for our program," Notre Dame coach Muffet McGraw said of her entire starting five -- which combined to score more than 10,000 career points for the Irish -- going in the first two rounds. "We set a lot of records this year with this group, and it's been such a blessing to have coached them and to see their success and them moving on to the next phase of their life. They've set a high standard for Notre Dame; it will take a while for us to ever see this kind of team again. It's probably a once-in-lifetime moment."

There was some melancholy in McGraw's voice and expression, though. You can tell she's still feeling a bit down not just because of the Irish's loss as they tried to win back-to-back championships, but the departure of so many top players at once. Young is a junior who was eligible to leave early because she turns 22 in the same year as the draft. The same was true four years ago of Irish guard Jewell Loyd, who was picked No. 1 and then was WNBA rookie of the year in 2015.

Loyd's decision to leave early seemed to take McGraw by surprise because Loyd didn't really discuss it with her coach beforehand. Young did talk to McGraw, who would have loved to have her back, but understood why she left. Especially once Oregon guard Sabrina Ionescu announced she would stay her senior season and not enter the draft, it became likely that Young would be the No. 1 pick.

Young will join another former Notre Dame guard, Kayla McBride, in Las Vegas. McBride was picked third overall in the 2014 draft by the Aces franchise when the team was still in San Antonio.

Entering the draft made a lot of sense for Young, although it leaves Notre Dame with a full-on rebuilding season coming up. Meanwhile, Baylor loses starters Brown and Jackson, but brings back everyone else, including forward Lauren Cox, who seems likely to be a WNBA lottery pick next year.

Sunday, Cox suffered a knee injury late in the third quarter of the championship game and then had to watch as her teammates lost their lead but held on to win. Monday, back in Waco, Texas, the team celebrated with fans at the Ferrell Center, and then an exhausted coach Kim Mulkey said she went home that evening to relax in a hot bath.

"But I knew Lauren was getting an MRI, and the trainer called me," Mulkey said. "I took it, thinking he was going to tell me she had torn her ACL. But he said, 'I've got good news, Coach.'"

Cox had suffered a bone bruise and a strained MCL, but had no damage to the ACL and would not require surgery. The worst-case scenario might have meant she would have missed the entire 2019-20 season. But it was far better news than anyone expected.

"I called Lauren and joked, 'Why didn't you just come back and play in the fourth quarter, and not put us through all that stress?'" Mulkey said. "She just laughed. But you saw the impact that kid has on our team. Without her, other people had to step up."

That included Brown and Jackson, and Mulkey was thrilled for both of them. Everyone expected the 6-foot-7 Brown to be a first-round selection. She said she's eager to play with the likes of Candace Parker and Nneka Ogwumike with the Sparks and will "try not to act star struck" in meeting them.

But Jackson wasn't on most evaluators' radar when she came to Baylor last fall as a graduate transfer. Mulkey expected her to play more shooting guard, but Jackson had to move to point once Alexis Morris was dismissed from the program.

"I couldn't have told you then that Chloe would be our starting point guard, let alone that she would make the shots we needed at the end of the national championship game," Mulkey said. "I didn't realize it until about the middle of the season: This kid can handle it, because she doesn't get too high or low. She never got rattled.

"One of the conversations I had with Chloe was that she thought playing the point was the only real chance she would have to get people's attention so she'd get the opportunity to play pro ball. I think she knew what she could do at the point better than I did."

As for Brown, Mulkey said, "She has to be on top of the world right now. All of us are, but with Kalani being a senior, and the only thing that was missing from her résumé was this. Now she's a national champion, she's a top draft pick and she's going to get her degree in a couple of weeks. And life is good." 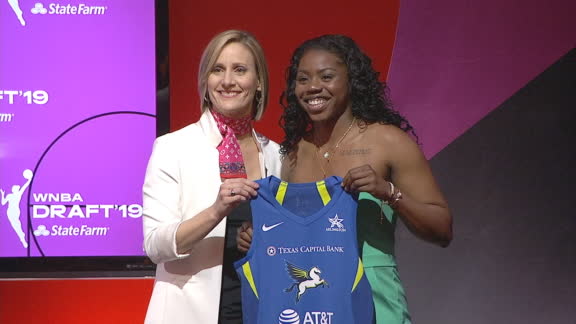