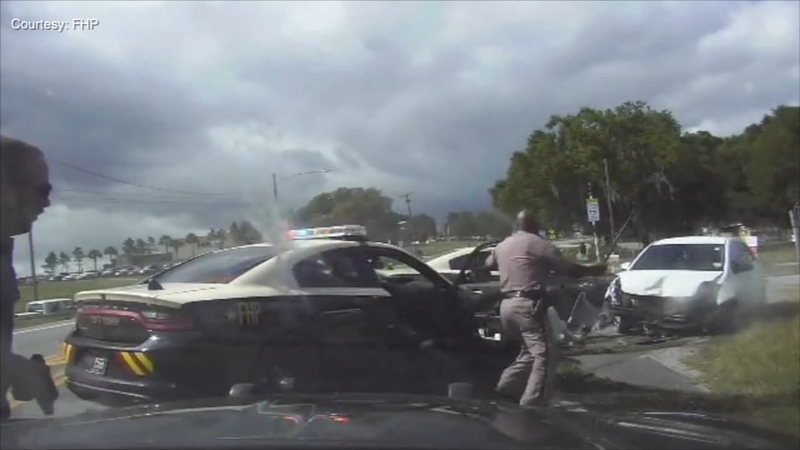 PASCO COUNTY, Fla. -- Three Florida women were arrested after leading officers on a wild chase. They took off speeding after troopers responded to reports the women were seen naked at a rest stop.

It all started Wednesday morning at a rest area off I-75 in Pasco County. When a highway patrol officer responded to a report of a suspicious person, the trooper found the three women completely naked. They said they were "air drying" after bathing themselves outside at the rest stop, WFTS reports.

As the officer tried to get their information, the women took off in a white Nissan Sentra. The trooper tracked them down at a convenience store parking lot, where authorities said the driver tried to run him over and a passenger went after him with a bat.

WFTS reports another officer rammed the suspects' car in an effort to stop them, but the women got away again. Dashcam video shows a trooper rear-end the Nissan, causing it to spin out of control and hit a guard rail. The women refused to exit the vehicle.

Once officers got them out of the car, all three women were taken into custody.

Bay News 9 reports that the driver of the vehicle failed a field sobriety test. Another woman had a spit bag placed over her head. All three women were tasered.

Marijuana was also found in the vehicle.

Norma Urig, who was driving to Georgia that day, stopped at the rest stop on Wednesday. She was blown away by what witnesses told her, and said she usually takes her grandkids on trips with her.

"What if they had been with me? That's not something I would want them to see," Urig said. "People know what a rest area is for and it certainly isn't that."

She disapproved of the women leading police on a chase and said they put people in danger.

"They're there to protect us. What if someone desperately needed an officer or medical care while you're playing goose with them?" Urig said.