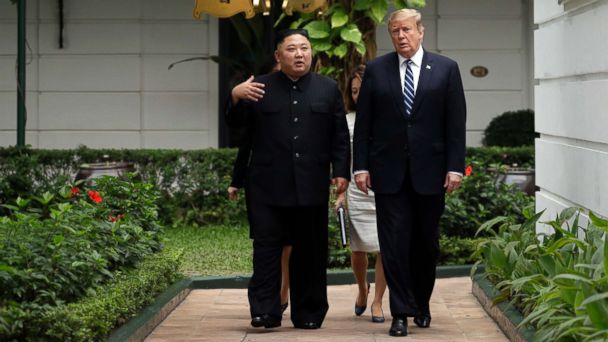 President Donald Trump tweeted on Saturday that he is open to a third summit with North Korean leader Kim Jong Un, citing their "excellent" personal relationship and understanding of "where we each stand."

"I agree with Kim Jong Un of North Korea that our personal relationship remains very good, perhaps the term excellent would be even more accurate, and that a third Summit would be good in that we fully understand where we each stand," Trump tweeted before heading to Trump National Golf Club in Sterling, Virginia, for the day.

"North Korea has tremendous potential for... extraordinary growth, economic success and riches under the leadership of Chairman Kim," Trump added. "I look forward to the day, which could be soon, when Nuclear Weapons and Sanctions can be removed, and then watching North Korea become one of the most successful nations of the World!"

In a speech reported by North Korea's state-run media, the Korean Central News Agency, Kim announced that he is willing to meet with Trump for a third summit and praised the personal relationship he has developed with Trump.

"As President Trump keeps saying, the personal ties between me and him are not hostile like the relations between the two countries and we still maintain good relations, as to be able to exchange letters asking about health anytime if we want," Kim said.

But he added that before any meeting, the United States must change its policies toward North Korea and lift sanctions by the end of the year.

"We will wait for a bold decision from the U.S. with patience till the end of this year but I think it will definitely be difficult to get such a good opportunity as the previous summit," Kim said.

Trump and Kim first met in June 2018 in Singapore, and their negotiations and correspondence via letters continued until their second summt in Hanoi, Vietnam, in February. But the talks broke down and the summit was unexpectedly cut short because North Korea wanted the United States to lift all sanctions, according to Trump. He has not said whether or not he has remained in contact with Kim since Hanoi.

At the White House on Friday, Trump met with South Korean President Moon Jae-in to discuss a path forward with North Korea and the potential for a smaller nuclear disarmament deal.

"There are various smaller deals that could happen," Trump said "You could work out step-by-step pieces, but at this moment we're talking about the big deal. The big deal is we have to get rid of nuclear weapons."
Report a correction or typo
Related topics:
abc newsnational
Copyright © 2020 ABC News Internet Ventures.
More Videos
From CNN Newsource affiliates
TOP STORIES