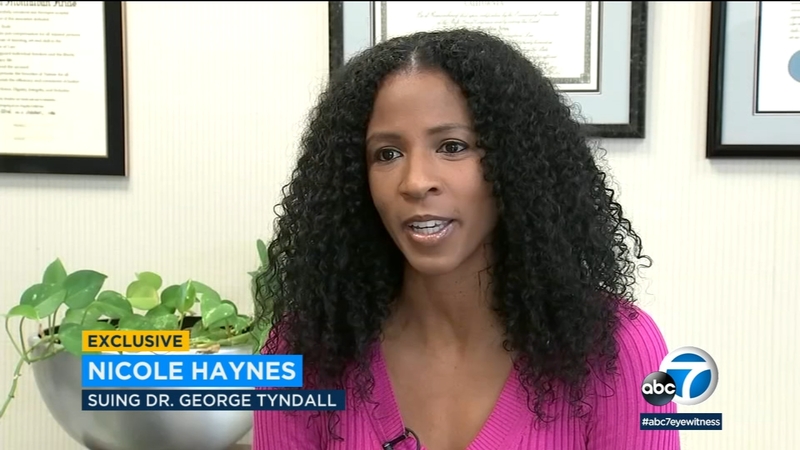 That year she would win gold for the heptathlon in the Pac-10 Championships.

It was also during that time that she met USC gynecologist Dr. George Tyndall.

"I grew up pretty healthy so there's very few occasions where I remember feeling very sick but this one sticks out in my mind," Haynes said.

At the time, Haynes went to her university medical center.

She says she vividly remembering having extreme stomach pains.

She recalls being placed in a waiting room, and Dr. Tyndall coming in to ask her what was wrong.

Haynes said, "I was in a lot of pain. I just wanted to get to the bottom. So anything he would've said to me at that point, I was willing to do. Take your clothes off, lay on the table, put your legs in stirrups, I was like OK. Just find out. I just need this pain to stop."

But, she says instead of checking what was wrong with her stomach he did something else.

"He went ahead and examined my vaginal area. I just remember it was overly painful, at the time I was still a virgin." Haynes said.

"In addition to the pain I was going through, it was just very traumatic. Extremely traumatic and after I got done with the exam I was like - where is my script, and what do I need?

Haynes says she never told anyone explicitly what happened that day, but her roommate at the time remembers Haynes coming back from the doctor's appointment upset.

When we spoke to her former roommate she also said she remembers that time clearly, because Haynes never got sick or went to the doctor.

Haynes' story is now among hundreds of women who are making sexual misconduct claims against the doctor.

She didn't file a police report because of the statute of limitations. But the LA District Attorney's office says they've received 102 police reports from other people.

Tyndall's lawyers said to us in a statement that: "Dr. Tyndall continues to deny engaging in any unlawful conduct while a gynecologist at USC."

Tyndall worked at USC for three decades. Beginning in the 1990s, several complaints were made against him, but no action was taken until a USC investigation last year.

USC has now agreed to a $215 million settlement over a class action federal lawsuit, but attorneys suing on the state level are challenging the decision.

They believe the settlement essentially shields Tyndall and the administrators who allegedly didn't take appropriate action after initial complaints.

Women who are confirmed class members and agree to the settlement will be eligible for financial compensation, starting at $2,500 and up to $250,000 for those who provide more details about their alleged experience.

Haynes says there's no way she'll ever settle with Tyndall and hopes other women will also step forward.

"I would like to face Dr. Tyndall. He violated me. And he needs to know that this is not OK. And me and the rest of the victims will not stand for this," Haynes said.