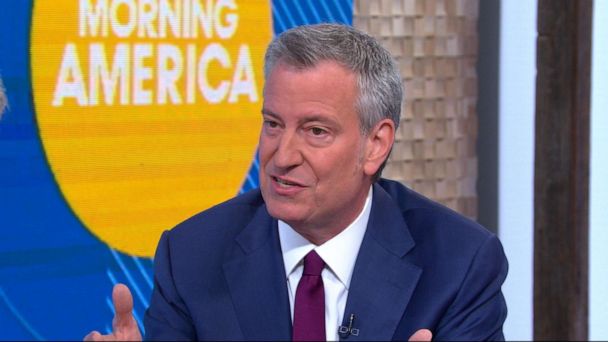 New York Mayor Bill de Blasio made his case for president in an appearance on ABC's "Good Morning America" after releasing a video announcing his candidacy on YouTube earlier Thursday morning.

Sitting next to his wife, Chirlane McCray, he made it clear a large part of his strategy will be to attack President Donald Trump.

"Donald Trump is playing a big con on America, I call him 'Con Don' every New Yorker knows we know his tricks, we know his playbook. I know how to take him on," he told ABC Chief Anchor George Stephanopoulos.

Trump wasted no time firing back. Within minutes, he tweeted de Blasio is "considered the worst mayor in the U.S., will supposedly be making an announcement for president today. He is a JOKE, but if you like high taxes & crime, he's your man. NYC HATES HIM!"

Trump isn't the only one opposing de Blasio's bid for the White House. As the mayor spoke on "Good Morning America," protesters outside the studio chanted "liar" and blew whistles loud enough to be heard inside.

De Blasio is expected to speak to reporters in lower Manhattan later in the day. His first campaign stop Friday morning will be in Gowrie, Iowa, with his wife. With several stops expected that day, the mayor will end the night in Sioux City. On Saturday, he'll head to South Carolina with stops in Columbia and Charleston. Sunday, he starts the day in Charleston and leaves early for his son, Dante's, graduation.

De Blasio, who is in his second term, joins a crowded field of nearly two dozen Democrats seeking to move into the White House.

Earlier this week, de Blasio held an event at Trump Tower in New York to announce that eight of the president's signature namesake buildings would owe the city $2.1 million per year if the Trump Organization doesn't make changes to cut their greenhouse gas emissions, in New York City's version of the Green New Deal, which is set to take effect on Friday. As he took the stage, behind him were protesters holding signs that said "failed mayor" and "worst mayor ever," as well as his face on the body of Big Bird from "Sesame Street."

When asked if the protests foreshadow what's to come for a potential bid, the mayor on Monday said: "It means we're doing something important here in New York City, if all these people who support President Trump are opposing what we're doing. We must be doing something right."

De Blasio has been New York City's mayor since January 2014. In that role, he implemented universal pre-K and signed an executive order to exchange single-use plastics for compostable or recycling alternatives in an effort to reduce carbon emissions, plastic pollution and wildlife risks.

In January, de Blasio talked on "The View" about his plan for comprehensive health care for all New Yorkers, including 300,000 undocumented New Yorkers.

De Blasio has a history with several prominent Democrats very familiar with presidential runs. He was the campaign manager for Hillary Clinton's Senate campaign in 2000 and was sworn into office for his first term as mayor by Bill Clinton. Earlier this year, he was sworn in to his second term by Sen. Bernie Sanders.
Report a correction or typo
Related topics:
abc newsnational
Copyright © 2020 ABC News Internet Ventures.
More Videos
From CNN Newsource affiliates
TOP STORIES