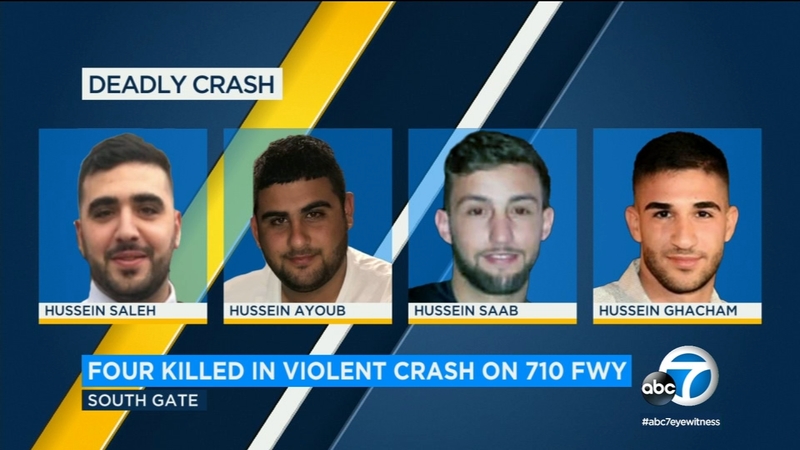 SOUTH GATE, Calif. (KABC) -- Four men were killed when a car slammed into a sign pole Wednesday morning on the 710 Freeway in South Gate, prompting the shutdown of multiple northbound lanes for hours, authorities said.

The high-speed crash was reported at 3:17 a.m. near the Firestone Boulevard exit, according to the California Highway Patrol. The driver and three passengers in a BMW sedan were pronounced dead at the scene.

"The vehicle was traveling at a high rate of speed, lost control, and crashed into the guardrail and the pole," CHP Sgt. Jason Lopez told reporters at the scene.

A family member said there was a group of friends following in a separate car. The occupants in that vehicle said a piece of metal fell from the undercarriage of the victim's car and a short time later the driver began swerving out of control and hit a guard rail.

"What we do know, just based on the evidence that we have, is that the vehicle made some type of turning input which caused it to lose control," Lopez said.

Family members of the victims said the group had been fasting in observance of Ramadan and had gone to Anaheim for the traditional breakfast after the fast.

Northbound traffic was backed up for miles as drivers inched past the crash site in the one northbound lane that remained open. Meanwhile, Los Angeles County firefighters had difficulty extricating the bodies from the BMW's mangled wreckage, which ended up wrapped around the sign pole.

The force of the impact so severe that the car's engine was ejected from the vehicle and ended up in a nearby ditch.

All but one northbound lane was reopened as of 11 a.m.

The victims' families were making arrangements for the men's bodies to be transported to Lebanon, where they will be buried.