KABC
LOS ANGELES (KABC) -- A man who was seen on video punching two women in the face at a downtown Los Angeles hot dog stand has been sentenced to 30 days in jail and ordered to anger-management classes after entering a guilty plea.

Arka Sangbaran Oroojian, 30, was also ordered to write a letter of apology and pay restitution to the two women he attacked on Jan. 26.

The Jan. 26 incident started when Oroojian got into an argument with a hot dog vendor at a stand in downtown LA.

One of the women then came to the defense of the vendor and told the man to order his hot dog so others could get their food.

At that point, the six-foot three-inch, 270-pound Oroojian turned and punched one woman in the face. Her friend jumped in and he punched her too, then he ran off on foot.

The two women were taken to a nearby hospital, and between them their injuries included a broken finger, a concussion and facial bruising.

Video of the incident went viral and the Sylmar man turned himself in to police several days later.

In the footage, multiple people are in the area and several are filming the confrontation, but no one intervened.

A man who allegedly punched two women at a downtown L.A. hot dog stand is now in custody after surrendering to police.

After entering his plea, his sentence includes 30 days in county jail, 30 days of community labor and three years of summary probation. He was also ordered to complete 24 anger-management classes and ordered not to possess any weapons while on probation.

Oroojian also must stay 100 yards away from the victims and the location of the assault.

"This was a brutal assault," said Los Angeles City Attorney Mike Feuer, whose office prosecuted the assault. "Attacks like this have no place in our city and won't be tolerated."

Shocking video shows a man punching two women in the face at a downtown Los Angeles hot dog stand. Warning: The video may be disturbing to some. 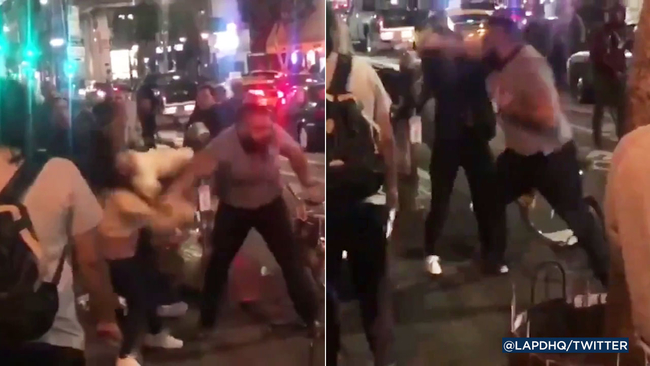