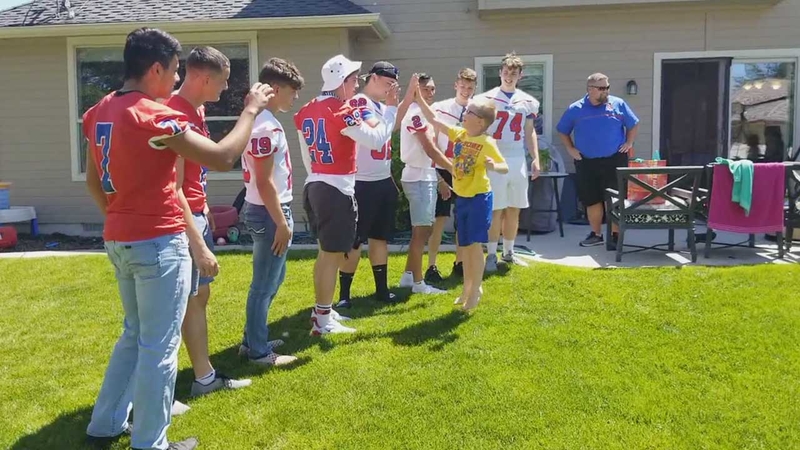 MERIDIAN, Idaho -- Days before her son's birthday party, an Idaho mom of a young boy with autism took to social media to explain why she was disappointed that only one child had RSVP'ed. After a high school football team stepped in to save the day, their story has gone viral as an example of the power of compassion.

Lindsay Barrus Larsen said that, at an end-of-year class party, she watched as her 9-year-old son Christian approached classmate after classmate, asking them to RSVP to his birthday. She said several of them didn't even respond to him.

"At first I was just hoping that with the end of the year chaos, that the invitations were overlooked. But, after seeing the personal interactions, I'm thinking maybe there is more," she wrote on Facebook. "The hardest thing, is I do understand. It can be uncomfortable to try to be a friend with someone who has had outbursts and cried in class."

Larsen went on to say that she hoped it could be a learning experience, especially for parents, that when someone's differences make you uncomfortable, it might be time to learn more about that person.

"The best way to get rid of that uncomfortable feeling is to make it not be so different anymore," she wrote. "If that stranger who acts weird becomes your acquaintance with a quirk, they may become a friend with something really special."

Larsen's post didn't make any requests about Christian's birthday. She said she was planning activities for Christian and the one friend who was coming.

Blythe Ben-David, a friend of Larsen who lives in Texas, had a connection with a high school football coach for a team near where Larsen lives. She helped get them in touch to arrange a big surprise for Christian: football players in uniform.

That coach, Nampa High School's Dan Holtry, said he was happy at how quickly the players stepped up to volunteer.

"The kids, before I could finish the text -- it felt like -- they were like, 'Coach, We're in,'" he told KTVB. "I was amazed at how much they wanted to participate in this and take care of Christian."

On the day of the party, it turned out a few neighborhood kids and other friends showed up, and Christian was having a lot of fun at his science-themed party.

But when his special guests showed up, Christian was blown away, as the video his mom took shows. When they came into the backyard chanting his name, Christian fell over in shock.

"I literally pretended to pass out when I saw them," Christian told KTVB. "It was really cool!"

Larsen said the players stayed for the rest of the party, joining in singing happy birthday and actively playing with the kids. She said the kids even asked for the players' autographs.

"It was truly amazing to watch them," she wrote.

Now that the story is picking up traction, Larsen said that, rather than ask for more cards for Christian, she wants to send the attention elsewhere.

"There have also been many offers of cards and gifts for Christian. This is so kind, but really, he had a great birthday, and we'd rather pay it forward and keep the kindness going, than keep it for ourselves," she wrote.

Larsen encouraged anyone who wants to help to donate to the football team, who needs some equipment, or to a local initiative Christian cares about called Shine Fitness Kids, or to just spread a little kindness.