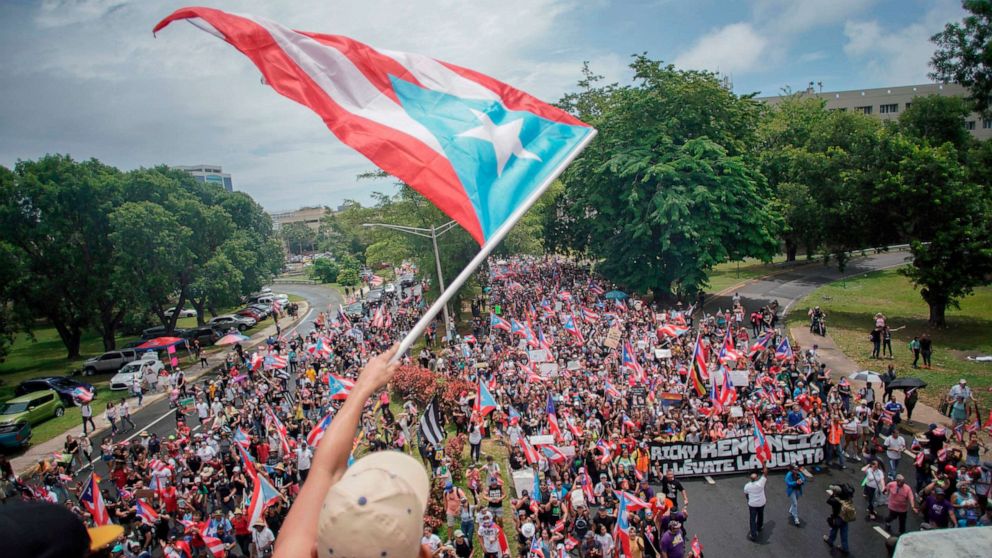 ABCNews
By JOSHUA HOYOS
The clock is slowly ticking in Puerto Rico - Ricardo Rossello is supposed to step down as governor this Friday at 5 pm. The question of who will become governor took a turn Sunday when the next in line to the office, Justice Secretary Wanda Vazquez, tweeted she didn't want the job.

"I reiterate, I have no interest in occupying the position of Governor. The constitution dictates it. I hope that the Governor identifies and submits a candidate for the position of Secretary of State before August 2 and I have told him so," Vasquez wrote in a tweet in Spanish on Sunday.

Rossello announced his resignation in a video message to the island late Wednesday evening. "I hope that this decision will serve as a call for citizen reconciliation that we need so much to move forward with the welfare of Puerto Rico as its north," Rossello said in the remarks announcing his resignation.

His resignation came after weeks of protests sparked by the release of offensive text messages between Rossello and his top aides.

According to the island's law of succession, Secretary of State Luis Rivera Marin was supposed to become governor after Rossello's departure, but Marin resigned his post on July 13 in the wake of the Telegram chat scandal.

Following the secretary of state in the line of succession is Vazquez, who could either be sworn in to the governorship or resign before she gets the keys to La Fortaleza, the governor's mansion. Vazquez met with Rossello and senior staff on July 26 to discuss the transition of power but has since sent the tweet saying she isn't interested in the job.

Vazquez, who oversees all investigations under the purview of the Justice Department, has been a target of protesters who are calling for her to step aside after not appearing to aggressively investigate Rossello and members of his party, as well as not pursuing the alleged mismanagement of supplies for victims of Hurricane Maria.

"The desire and agenda of some to try to undermine my credibility at this moment of transcendental importance to Puerto Rico and to destabilize the governmental order is evident," Vazquez said in a statement, "which only attempts to perpetuate instability and restlessness in the country."

Treasury Secretary Francisco Pares is next in the line of succession, but he cannot take the role because he is 31 and the constitution states an age requirement of at least 35 to be governor.

Education Secretary Eligio Hernandez, who is largely unknown and has little political experience outside of his recent work inside the Department of Education, would then have the job after Vazquez if she were to step aside. Hernandez got the job when the previous Education Secretary Julia Keleher was arrested on federal corruption charges, just days before the Telegram text chats were released by the nonprofit Puerto Rico Center for Investigative Journalism.

Rossello can submit a nominee to be the secretary of state for legislative approval prior to his departure. That person would assume the role of governor Friday evening if approved by the House of Representatives and the Senate.
Report a correction or typo
Related topics:
abc newsnational
Copyright © 2020 ABC News Internet Ventures.
More Videos
From CNN Newsource affiliates
TOP STORIES