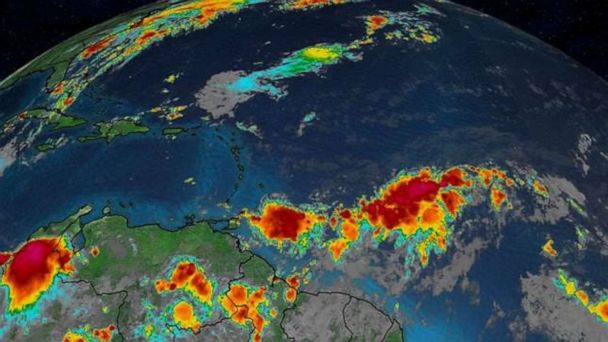 ABCNews
By REED MCDONOUGH
Tropical moisture remains in place in the Southeast, bringing the threat for tropical downpours through Sunday morning. Torrential downpours, with 2 inch per hour rainfall rates in some places, are possible.

Cars became stranded in high floodwaters in Orange County, Florida, on Friday with several being pulled from the water.

Tropical moisture is expected to spread more showers and thunderstorms across the Southeast this weekend, especially in southern Florida on Saturday. Locally heavy rain, possibly over 4 inches, could cause localized flash flooding in parts of Florida.

Farther east, a cluster of thunderstorms in the middle of the Atlantic is worth monitoring for possible organization and development. Right now there is a 40% chance of development as the system drifts toward the Lesser Antilles.

Tropical Storm Erick, with winds of 40 mph, is moving south of Hawaii on Saturday and will weaken later in the morning and afternoon, likely becoming a depression. Locally heavy rainfall and rough surf could still impact Hawaii through the day.

Tropical Storm Flossie will move closer to the Hawaiian Islands, but shouldn't have too much impact either. It had winds of 60 mph early Saturday, but is moving into cooler waters. Flossie will weaken throughout the weekend as it moves north of Hawaii, likely becoming a depression by Monday.

At this time, most impacts from Flossie look to remain offshore, however, some rough surf could still be possible.

Rain, flooding in the Plains

Low pressure remains over the Central Plains on Saturday, bringing a threat for more thunderstorms and heavy rainfall, mainly in northern Oklahoma.

Localized rainfall rates of 1 to 2 inches per hour are expected in this same area through Saturday afternoon, bringing a risk for flash flooding in some areas.

Some locations, mainly in northern Oklahoma, could see an additional 4 inches of rain through Saturday evening.