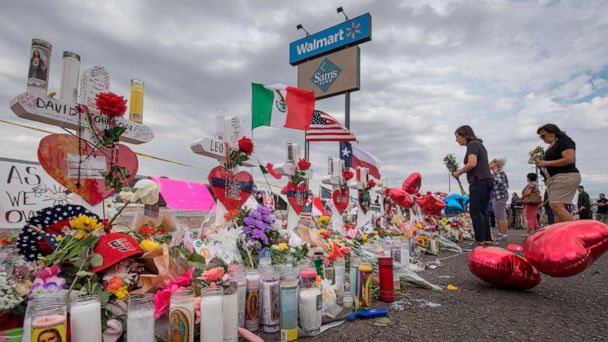 As families and friends of shooting victims in El Paso, Texas, and Dayton, Ohio, grieve, some local leaders are uneasy about President Donald Trump's planned trips to both cities today.

El Paso Mayor Dee Margo, a Republican, said he would be there to welcome the president in an official capacity, but would "continue to challenge any harmful and inaccurate statements made" about the city, noting it wasn't a "political visit" like Trump's February rally for a border wall. Rep. Veronica Escobar, who replaced Beto O'Rourke in Congress, has declined to participate.

Nan Whaley, Dayton's Democratic mayor who has been critical of Trump's rhetoric, said she plans to tell him "how unhelpful he's been" on addressing gun violence.

Other Democrats are questioning whether the president can be the "consoler-in-chief" and are urging him to stay away from the cities entirely, according to ABC News Deputy Political Director MaryAlice Parks: "It's worth reflecting on that. We have this moment of national crises and a president that's not welcome on the ground."

Authorities are working to determine a motive in the Dayton, Ohio, massacre and are now investigating evidence that they say shows the gunman was exploring violent ideologies and "expressed the desire to commit a mass shooting."

Dayton Police Chief Richard Biehl said officials "do not have true clarity on the motive of the assailant" but that there's "a more developed picture" of his mindset.

The alleged gunman, Connor Betts, killed nine people, including his sister, before police fatally shot him.

Adelia Johnson, who said she once dated Betts, told ABC News' Eva Pilgrim, "He talked about mass shootings and world tragedies like I talk about television shows."

ABC News also has learned of a deleted Twitter account believed to be linked to Betts, who described himself as an anime fan, a metalhead and a leftist.

In an escalation of tensions with Venezuela's Nicolas Maduro, the White House has issued a full embargo against his regime, freezing all Venezuelan assets in the U.S. and allowing the Trump administration to impose sanctions on anyone who does business with Maduro.

Venezuela's U.N. ambassador blasted the decision on Tuesday as "an act of war," calling it "economic terrorism."

Legendary author Toni Morrison's chronicles of the black experience in America, including in "Beloved," "The Bluest Eye" and "Song of Solomon," transformed modern literature, earning her recognition as the first African American woman to win a Nobel Prize.

After news of her passing at 88 years old earlier this week, writers and fans have shared what Morrison's voice meant for black identity and the impact of her legacy beyond storytelling.

"She situated black people at the center of our lives and the world," Christina Sharpe, a professor at York University in Toronto who specializes in African American literature, tells the podcast. "For her, for us, that wasn't small -- that was large."

'These young men look like they work for you': Alexandria Ocasio-Cortez blasts Mitch McConnell over a photo showing his supporters "groping and choking" a cardboard cutout of her.

'The result of unrelenting pressure from President Trump and his political allies': A former FBI special agent is suing the Justice Department over his August 2018 firing.

No Terrorist Is A 'Lone Wolf': Even apparent loners are connected to extremist communities.

If you've been on Twitter in the past 36 hours, you may have found yourself asking an unprecedented question: Why is everyone tweeting about feral hogs?

More specifically, why is everyone tweeting about 30 to 50 of them? And why are a lot of the tweets in apparently a parody of a William Carlos Williams poem?

The answer lies with this weekend's mass shootings, Americana singer Jason Isbell and a general delirium that afflicted social media after several days of ghastly news.

ABC News' Evan McMurray dove deep into the heart of the story HERE.

And, to use his words, it appears nobody has made a joke about the real feral hogs being the friends we made along the way, so there it is.
Report a correction or typo
Related topics:
abc newsnational
Copyright © 2020 ABC News Internet Ventures.
More Videos
From CNN Newsource affiliates
TOP STORIES