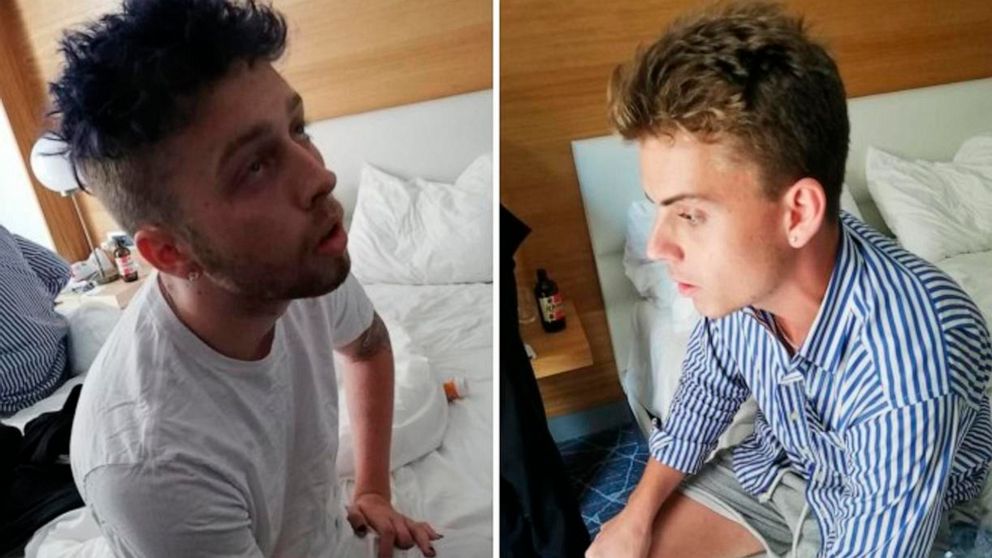 ABCNews
By KATIE CONWAY
One of two American teens accused of killing an Italian police officer appeared to be "numb" and remained stone-faced during a visit from an Italian politician, who described suspect Finnegan Elder as giving only brief answers to the questions he was asked, the politician told ABC News in a telephone interview this week.

The other teen, Gabriel Christian Natale-Hjorth, "burst out crying" and embraced his father when the older man arrived at the central Rome prison to see his son yesterday evening, according to ABC San Francisco station KGO.

"Gabriel is exhausted, frightened, and trying to make sense of it all," Fabrizio Natale told KGO reporter Dan Noyes in an exclusive interview in Rome.

Finnegan Elder, 19, and Natale-Hjorth, 18, remain jailed in the Italian capital on suspicion of attempted extortion and aggravated murder in connection to the fatal stabbing of Mario Cerciello Rega, a 35-year-old deputy brigadier in Italy's Carabinieri paramilitary police force. The two teens are accused of attacking Cerciello Rega and his partner on a street corner in Rome in the early morning hours of July 26 after a botched drug deal

When Italian Parliament member Ivan Scalfarotto visited the teens last Tuesday, July 30, he said that he found them being held in two separate cells, each housed with another foreign, English-speaking prisoner. The teens were dressed in boxer shorts, flip-flops and t-shirts, Scalfarotto said. They are being housed in a facility with no air conditioning, a bunk bed in each cell and bars on the windows. Fresh fruit on the tables in each cell, Scalfarotto noted.

As an Italian Parliament member, Scalfarotto has the right to inspect any prison without notice, and said he felt obligated to check on the teens' conditions following a leaked image that showed Natale blindfolded during police interrogation.

Scalfarotto describes Natale as "confident," and said that "I think Gabriel felt rather reassured, he was more in control of the situation." Scalfarotto says Natale told him, "the worse part has passed," now that he [Natale] understood where he was and the dynamics of his situation. Scalfarotto said that Natale seemed very present and spoke very good Italian, and even shared with Scalfarotto that part of his family was in Italy.

Scalfarotto visited the teens last Tuesday, five days after their arrest, and before they were able to meet their families. The Parliament member confirmed that both teens had been in contact with an attorney and were paid a visit by a U.S. Embassy representative prior to his arrival.

Scalfarotto's visit sparked outrage from many Italians, but he insists the visit did not show sympathy for the crimes, but instead was simply to ensure the prisoners were being treated in a humane way with dignity in accordance to Italian law.

In his KGO interview, Natale - the jailed teen's father -- gave new details of the events leading up to the killing. Natale-Hjorth, along with his father and brother, arrived from San Francisco July 20, and went straight to his grandparents' beach house in Fregene.

On Wednesday Natale-Hjorth asked his uncle to drop him off in Rome, after hearing from a friend, who turned out to be Elder, and wanting to show Elder around town, Natale said.

The father said he did not believe that his son and Elder were particularly close friends.

"I've never heard of Finn before," Natale said. "He's not in his circle of friends."

Natale-Hjorth was dropped off at the Meridian Hotel in Rome, where Finn's mother had booked a room for him using miles. That Wednesday night out was uneventful, Natale said, adding that the two teens stayed for two nights at Elder's hotel.

On Thursday, July 25, Natale-Hjorth texted his uncle for restaurant recommendations. But by Friday morning, Natale-Hjorth's uncle couldn't reach him. He went back to the hotel to find police swarming the place, according to Natale.

The family only learned that Natale-Hjorth had been arrested when a photo of him appeared on the 8pm news in Rome, he said.

"It was the deepest discomfort," Natale said. "I was frightened myself. You just feel emptiness. If feels like the whole world is crashing in on you."

It took five days before Natale was able to see his son at the jail, Natale told KGO.

"He burst out crying. We hugged each other," Natale said. "Gabe started telling me he had no idea about the stabbing, he had no idea the other boy had a knife. He had no idea it could turn out that way and kept repeating that over and over again."

Then a photo got leaked - police had handcuffed and blindfolded Gabriel before his interrogation.

"I certainly didn't feel good to see that photo," Natale told KGO, "It's the understatement of the year."

Natale and his lawyer said they decided to talk to Noyes because of the legwork he has done; they are using I-Team reports, in part, to prepare their case.

"We are convinced of Gabriel's innocence," Natale said. "We believe when the truth comes out, it will serve us well."

Natale called Rega's death a "tragedy," and expressed his sympathy to the man's family. "They lost a human life. I feel their grief," he said. "In truth, there's nothing I can say to make their pain less excruciating and I'm aware of that."

On Tuesday this week, defense teams for both young men returned to the hotel room where the young men stayed. Prosecutors brought a forensics team for another examination.

In his first public statements on the case, Elder's attorney Roberto Capra said, "The operation wasn't very relevant." He is pressing prosecutors to release surveillance videos of the deadly altercation, including one from the bank across the street, according to KGO.

"We're confident that the video of the moment of the encounter exists," Capra said.

Capra told the crush of reporters that Elder didn't know that Rega was a police officer, and that lashing out with this knife was "a reaction" because Finn felt he was being strangled in a drug deal gone wrong.

"He said that when he was first questioned, and this quote is in the official report," Capra said.

Prosecutors claim the boys were "clearly under the influence" of beer, liquor and drugs that night, but they admit police did not collect blood samples. So there is no independent proof that the young men were impaired by anything.
Report a correction or typo
Related topics:
abc newsnational
Copyright © 2020 ABC News Internet Ventures.
More Videos
From CNN Newsource affiliates
TOP STORIES