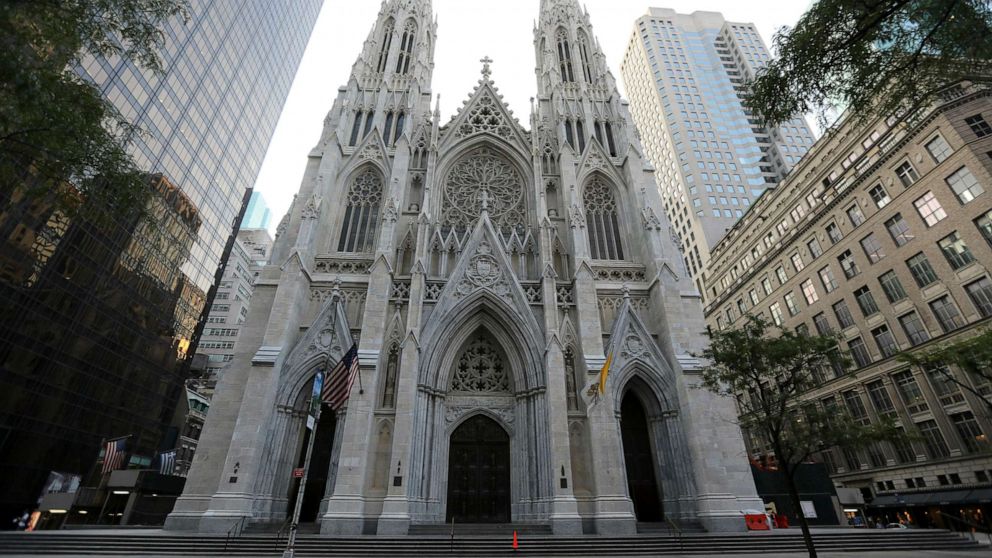 Leaders of the Catholic Church in New York are facing a "dark time" in the wake of a passage of a law that now allows alleged victims of child sexual abuse to file civil lawsuits against offenders even if the statute of limitations expired previously.

The Child Victims Act clears the way for alleged victims of child sexual abuse to file hundreds if not thousands of lawsuits -- against other storied institutions in addition to the Catholic Church -- within the next year.

"Today, I don't mind admitting to you, is a dark time for the church. As you have probably been hearing, this is the first day of the opening of the statute of limitations. So we are going to hear a lot today about people bringing a suit against the Catholic church and other organizations -- public schools, government organizations, Boy Scouts, hospitals, you name it -- for past sexual abuse. I just want to say that it is a tough time, it is a dark time, it's especially difficult for our beloved victims and their families to see all this dug up again, to have these wounds open. It's a tough time for our victims, survivors and families. and I'd ask you to pray for them," Dolan said.

Joseph Zwilling, the director of communications for the Archdiocese of New York, shared a statement with ABC News, saying the church "has been anticipating the filing of lawsuits since the Child Victim's Act passed earlier this year."

The Archdiocese has also been paying out victims separately for the past three years through its Independent Reconciliation and Compensation Program. Zwilling confirmed the fund has paid more than $66 million to 335 victims since it was created.

Since any victims who reached a settlement through the fund waived their right to file subsequent lawsuits, those victims will not be participating in any of the suits filed in connection to the Child Victims Act window, which opened Wednesday and will last for one year.

"While we carefully review the claims made in these suits, we ask that people pray for peace and healing for all those who have suffered from the sin and crime of the sexual abuse of minors, wherever it occurred, particularly victim-survivors and their families," Zwilling said in the statement.

Multiple law firms have announced their intentions to file dozens, if not more than 100 lawsuits each, on behalf of clients who allege that they were abused as children.

Even after the one year window expires, many survivors of alleged child sexual abuse will still be able to seek justice under the Child Victims Act. Civil suits can now be filed until the alleged victim turns 55 years old, up from the current 23. And the state's statute of limitations on criminal charges against alleged child sexual abusers has been expanded to until their victims turn 28 in certain cases, rather than 23.

Amala's firm, which is based in Washington state and partnered with New York-based The Marsh Law Firm, filed 17 lawsuits on Wednesday and expect many more to come in the following weeks and months during the year-long window.

"I think today will be the biggest day, but as people see others coming forward, I think they'll come forward as well," Amala said.

Gail Coleman is one of 45 people suing Rockefeller University over alleged abuse at the hands of a doctor who worked at the university's hospital. That doctor, Dr. Reginald Archibald, died in 2007, decades after he allegedly abused Coleman.

She told ABC News that she was "a very, very tiny child" and at the recommendation of her pediatrician, her parents took her to see Archibald, who was running a growth clinic at the time. She was 11 in 1974 when she first met with Archibald, she said, and during the appointment, he allegedly had her remove her clothes and he took extensive measurements.

Coleman said that he "took pictures of me nude" and "took close-up pictures of my genitals." She also told how he allegedly poked her nipples after the measurements were finished. She returned to Archibald for two subsequent visits, in 1975 and 1976, but cancelled the fourth appointment because of her discomfort with the situation.

"I was humiliated. It did not feel right to me," Coleman told ABC News.

"That didn't feel right, but he was a doctor. I was a very shy and insecure child. I was very uncomfortable with my body. He preyed on my weakness. I couldn't tell anyone. I was embarrassed," she said.

Rockefeller University released a statement Wednesday saying that they are "committed to acting responsibly and working constructively with former patients of Dr. Archibald. We profoundly apologize to his patients who experienced pain and suffering as a result of his reprehensible conduct."

When she heard about the university's response to the lawsuit, Coleman said "that's nice of them to say but [the abuse was ] not just a result of his reprehensible conduct. The university knew or should have known... I blame them as well."

Coleman said that the memory of the incidents where she was allegedly abused "would keep bubbling up at various times" in the following decades, but her knowledge that the pictures existed haunted her.

"The fact that they're out there, I don't know if they've been destroyed ... that is an ongoing victimization to me. It's horrifying to me every time I think of it," she said.

Coleman said that she reached out to the university in 2003 in an effort to track down the photos. She said that someone in the medical records division told her that Archibald had retired and may have passed away at that point, even though he did not die until four years later.

"He was a monster and he died thinking that his secret died with him," Coleman said.

Subsequent letters clarified the reports they received about Archibald over time, and an investigation led to the creation of a report by the investigating team hired by the school and detailed how Archibald took semen samples from male patients, fondled patients and brushed up against patient's genitals, among other forms of sexual misconduct.

For Coleman, the goal is to raise awareness for other abuse survivors, to learn who knew what and when did they know about Archibald's alleged misconduct, and ultimately to get her pictures back.

"Where are the negatives? Where did they all go?" she said.

Jeff Anderson and Associates, a law firm that regularly represents victims of clergy sex abuse, announced Tuesday that they will be filing over 200 lawsuits in New York on Wednesday.

Mike Reck, an attorney at Anderson and Associates, said that they will be filing cases "involving every diocese and the archdiocese in New York."

Reck said that prior to the Child Victims Act being signed into law by Gov. Andrew Cuomo in February, New York's statute of limitations was "abysmal and draconian."

"That was one of the most restrictive rules in all of the United States of America and because of that rule, there were multiple generations that were kept from the justice available in the courts," he said.

"These cases will expose dozens of perpetrators whose identities have been kept secret by the institutions that protected them," Reck said, noting that victims are able to file their civil claims anonymously.
Report a correction or typo
Related topics:
abc newsnational
Copyright © 2020 ABC News Internet Ventures.
More Videos
From CNN Newsource affiliates
TOP STORIES