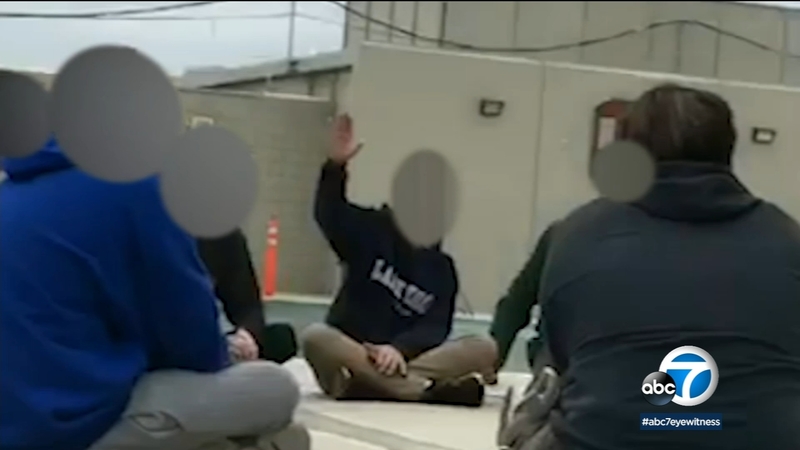 GARDEN GROVE, Calif. (KABC) -- New videos have been released of additional instances of students at a high school in Garden Grove making Nazi gestures as the school district reopens its investigation into one video that came to light earlier this week.

In that first video, about 10 boys from Pacifica High School's water polo team are seen at an off-site awards ceremony late last year. No coach or adult is in view.

The teens appear to be gesturing, using a Nazi salute and singing an obscure Nazi marching song once used to play for German troops and Adolf Hitler during World War II.

In the three new videos that came out Wednesday, students are seen outdoors on school grounds giving Nazi salutes, wrapping themselves in a Confederate flag and making Nazi salutes while they march with a German flag.

Two of the new videos are from last year and one is from three years ago, but shows students who are still at the school.

It's not immediately clear if any of the students in the new videos are the same individuals shown in the initial video.

"We've recently received new allegations, new photos and video, even within the past hour and new claims that have led us to re-open and widen the scope of the investigation," said Steve Osborne, principal of Pacifica.

Extra police were on hand at the district board's meeting Tuesday night as parents and teachers voiced frustration at not being told about the incident earlier.

The students in the initial water polo team investigation were disciplined, but teachers and parents were not informed about the incident at the time.

Now teachers and parents say they are angry they were not told.

"You had an obligation to let us know about this event. You failed miserably," Randy Steiner, a Pacifica parent.

Osborne, the school principal, apologized at Tuesday's school board meeting.

"We are sorry that our investigation and our transparency with the Pacifica community fell drastically short," Osborne said. "In retrospect our judgment was wrong and we take full responsibility for that."

And now that more evidence is coming to light, Osborne says there will be more transparency with the investigation.

Teachers are demanding they be part of changing the current school culture.

"We have to acknowledge that this is something that's in our community that we need to address and as teachers we hope to address it with the curriculum," said Adam Wemmer, a Pacifica teacher.