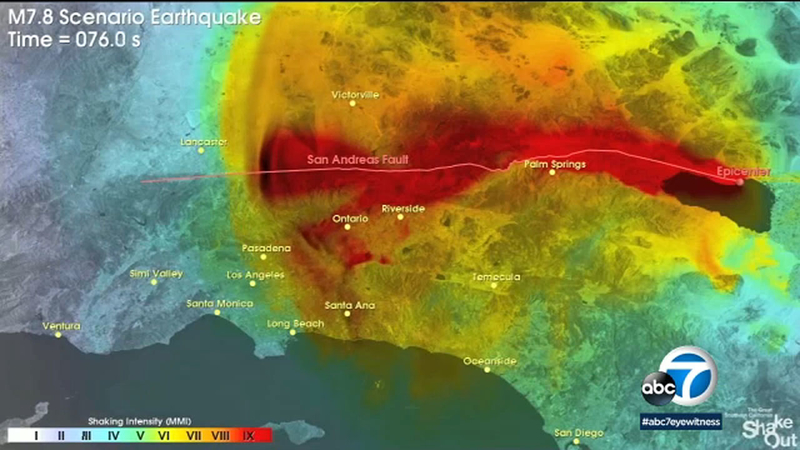 LOS ANGELES (KABC) -- A group of emergency managers, geologists and interested residents took part in a tour of the San Andreas Fault over the weekend.

The tour was led by seismologist Dr. Lucy Jones, who not only showed people visible signs of the 800-mile long fault, but discussed some of the potential impacts a large earthquake would have on our area.

The tour lasted nearly four hours. It started at San Bernardino city hall and went through the Cajon Pass all the way to Big Pines. Along the way, Jones described what an earthquake might be like along the San Andreas fault.

"In a magnitude 7.8, it's 200 miles long," said Jones. "When we modeled this earthquake, it started near the Salton Sea and the rupture continued all the way beyond Lancaster.

"Every point on that surface is giving off energy."

The first stop on the tour was in an area known as Lost Lake in the Cajon Pass. Jones showed guests a sag pond, which is a body of fresh water that collects along two sides of the fault zone. She also pointed out key pieces of infrastructure, including Interstate 15, railroad lines and transmission power lines that would be impacted in a big quake.

Jones also pointed out the San Gabriel mountains, which exist because they're pinched by the San Andreas and San Jacinto faults.

"The bend in the fault is pushing up the San Gabriel mountains," said Jones, who estimates the mountain range is growing at a rate of 3 millimeters per year.

"That may not sound like a lot but it's an inch every decade."

The second stop of the tour was near the top of Swarthout Canyon, which Jones says is bisected by the San Andreas fault. One of the people on the tour asked Jones what the group would experience if a large earthquake were to strike while everyone was there.

"Oh God, I wish," joked Jones. "But we could potentially see the rupture coming by us."

Jones then pointed to large boulders on the ground that were several feet in diameter.

"These big boulders here could literally be thrown in the air at accelerations exceeding the force of gravity."

The final stop was near Big Pines, just west of Wrightwood. Jones pointed out distorted rock formations along Big Pines highway as evidence of the fault. The group also stopped along the highway and examined one of the largest single pieces of fault evidence that Jones claims to have ever seen.

Jones was asked about what kind of impression she wanted guests on the tour to take home with them.

"When you see this is really the earth itself, and how much it's moved, you start to recognize the forces," said Jones, who also wanted people to see the impacts that a large earthquake would have on local infrastructure.

"Really being able to see our lifelines that cross the fault, and how much we're going need to work after the earthquake to bring it all back.

"And the more we can prevent the losses beforehand the better."
Report a correction or typo
Related topics:
southern californiaearthquakeusgs
Copyright © 2021 KABC-TV. All Rights Reserved.
More Videos
From CNN Newsource affiliates
TOP STORIES