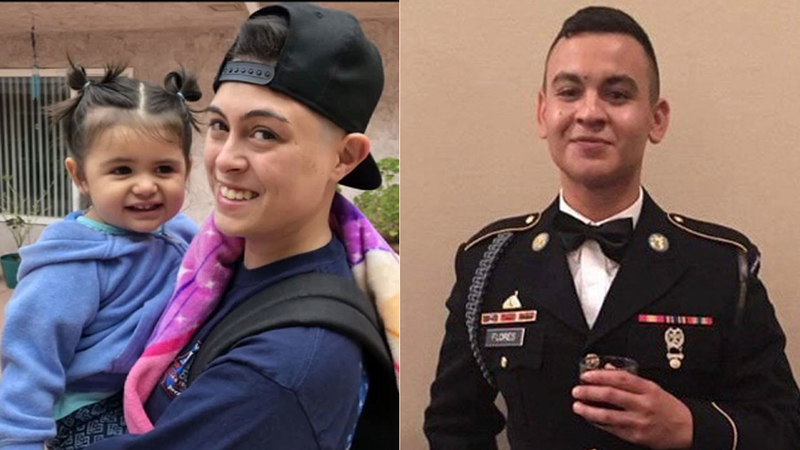 GRANADA HILLS, LOS ANGELES (KABC) -- A Simi Valley man has been arrested and charged in the killing of a 24-year-old mother at her Granada Hills home.

Cheyenne Brown, the mother of a 2-year-old girl, was gunned down in the alley behind her house as she returned home from work the night of July 22.

Surveillance video showed the suspected shooter lying in wait in a pickup truck in an alleyway and apparently ambushing Brown as she returned home. The gunman opened fire as she was getting out of her car.

After investigating and serving a series of search warrants, police arrested Javier Flores, 24, at his Simi Valley home last week.

A Granada Hills family seeks answers after a 24-year-old woman was gunned down, and as surveillance video from the shooting offers new details.

On Monday the Los Angeles County District Attorney's Office filed charges against Flores that include one count of murder with the special circumstance of lying in wait and allegations of using a handgun.

Family members indicate Brown and Flores knew each other, but the exact nature of their relationship and a possible motive for the shooting were not clear. Brown's friends, who provided photos of Flores to Eyewitness News, said Flores was once friends with Brown, and he was also her estranged wife's ex-boyfriend.

At the time of the shooting, family members said Brown was in the midst of a divorce with her wife, but her family said they could not imagine she was responsible.

In surveillance video from July 22, Brown is seen driving past the pickup that was waiting in the alley behind her home. Seconds later, the truck pulls up next to her car.

Video shows a shadowy figure get out, walk up to Brown and open fire.

The 24-year-old mother and competitive figure roller skater had just returned home from work and was getting things out of her car when she was ambushed.

Her backpack was still on the passenger side of her car. It appeared someone came up and shot her from behind.