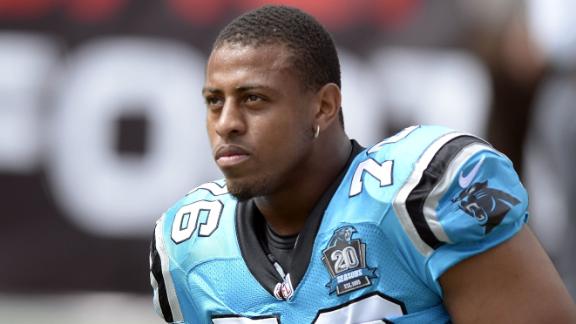 "At the end of the day, we didn't feel good about it," Licht told the newspaper.

Hardy and the Cowboys have had ongoing negotiations, and he stayed overnight in Dallas before his scheduled physical, which took place Wednesday morning.

A timetable for when Hardy will sign with a team is not known at this time.

Hardy, 26, was a 2013 Pro Bowl selection after leading Carolina with 15 sacks, tying a team single-season record.

Carolina placed the franchise tag on Hardy in February 2014, guaranteeing him $13.1 million for the season. On May 13, he was arrested and charged with assaulting and threatening to kill ex-girlfriend Nicole Holder.

A Mecklenburg (North Carolina) County judge found Hardy guilty on July 15. The verdict was set aside when Hardy requested a jury trial.

All charges were dropped on Feb. 9 because Holder refused to cooperate with the district attorney's office after receiving a financial settlement from Hardy.

Hardy was placed on the inactive list before the second game this past season and the commissioner's exempt list before the third game until his domestic violence case was resolved.

Although the charges were dropped, Hardy remains on the exempt list as the NFL conducts its own investigation into whether he violated the league's personal conduct code. He is eligible to sign with a team while he's on the exempt list.

There has been media speculation within the past week that Hardy could be suspended anywhere from one or two games to six. The league has the option of suspending him for more than six if officials feel there was enough evidence from his domestic violence case to warrant such a penalty.

The Panthers drafted the former Ole Miss standout in the sixth round of the 2010 draft. Hardy started 39 games between 2011 and 2013. He has 34 career sacks.