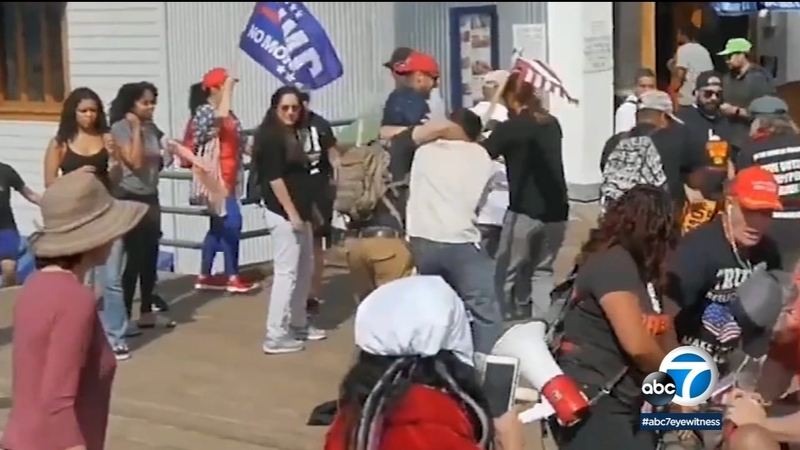 SANTA MONICA, Calif. (KABC) -- What was supposed to be a peaceful protest against the Trump administration Saturday turned violent when a man wearing a "Make America Great Again" hat used bear spray on demonstrators.

Video showed several people getting hit with the chemical and falling to the ground.

"All of a sudden just a big blow of bear Mace came and hit me in the face," said Bo Logan, a member of Refuse Fascism LA, the group that organized the demonstration.

"We had to go to the emergency room because my hands had burns on them. Another person had her arm injured. She was actually physically assaulted by these Trump supporters while she was on the ground," Logan said.

Santa Monica police arrested 32-year-old David Nicholas Dempsey. He was booked into custody for Use of a Tear Gas Weapon and Assault with a Caustic Chemical.

Police said several protesters were affected by the gas as were others who were on the pier. Four people were treated at a local hospital.

Refuse Fascism LA had spelled out "Trump-Pence #OUTNOW" in large letters along the Santa Monica beach. They were going to stage a "die-in" on the pier, but abandoned the plan after the chemical attack.