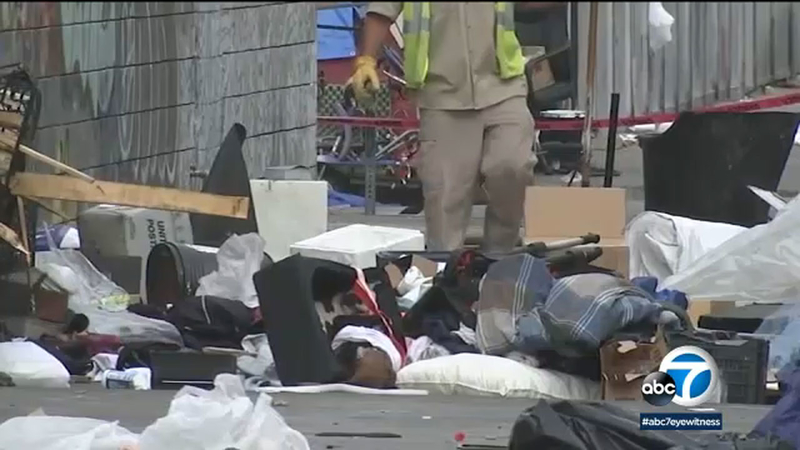 DOWNTOWN LOS ANGELES (KABC) -- Los Angeles Mayor Eric Garcetti is threatening to take swift action over trash that has been piling up in the city.

Businesses in the Fashion District have been calling the city to clean it up, with some owners saying they're losing customers.

"They say we'll put you on a list to have to clean up, they come a week later, and then it's back - the trash, the homeless - it's back the next day," said fashion designer Meghan Fabulous.

She says besides the trash, homeless camps are also an issue. She recorded a video of a homeless person throwing something at her as she drove by.

Others worry about the health conditions.

While the homeless get most of the attention, city leaders say the real problem is local businesses dumping trash on streets, and now the city is increasing fines dramatically to deal with it.

"The changes include higher fines, they have been increased by 300% for your first violation and you'll pay 150% more in fines for any other subsequent violations as well," Garcetti said.

Still, some feel the city needs to do more about the homeless camps.

"Everybody understands this," Steve Dunlap said. "There's mental health issues, there's substance abuse problems. We get that. But what we want to say to the politicians is there's got to be some balance."
Report a correction or typo
Related topics:
societydowntown lafashion districtlos angeles countytrasheric garcettibusinesshomeless
Copyright © 2021 KABC-TV. All Rights Reserved.
TOP STORIES
FDA backs Pfizer COVID-19 boosters for seniors, high-risk
Jeffrey Fire: Crews battle blaze in Chatsworth
Carson: Overturned big rig lands on car, covers it with sawdust
Car fire may be to blame for San Bernardino fire near 215 Fwy
Video: Tourist taken to hospital after melee on Hollywood Walk of Fame
Melvin Van Peebles, godfather of Black cinema, dies at 89
Laura Lasorda talks to ABC7 on Tommy Lasorda Day in Fullerton
Show More
Search resumes for Brian Laundrie in Gabby Petito case
Search continues for homeless man who slammed into LA pedestrian
Hollywood Burbank Airport shut down after person runs onto runway
Heat advisories issued for most of SoCal on first day of fall
Movie and film workers might be headed toward a strike
More TOP STORIES News